While Chad Kikstra started running in middle school — “I ran the 880, but was never that great,” he says — the Holland, Mich. father of two “gave it up in high school when I got an after-school job.” It would be many years before he re-discovered the sport.

“I started back up around 2002 when my wife ran a local Turkey Trot on Thanksgiving and I caught the bug while watching the race,” says Chad, who has been married to Megan for 17 years. They have two children, 14-year-old Zoe and 8-year-old Liam. “I ran that race the next year and have been running and racing ever since.”

Chad currently is training for his second Holland Haven Marathon this fall — and he has a big goal in mind.

“I am planning on running the marathon again this year in my quest for a Boston Qualifier — I missed out by 27 seconds earlier this year,” he says.

MRG caught up with Chad to learn more about his running journey, which he describes as “slow and steady improvement,” and what keeps him motivated to keep running and stay active. Here’s what he shared: 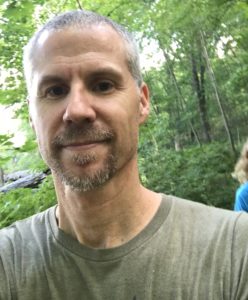 My best 5K, 10K, 25K, half marathon and marathon times have come in the past year through growing older and wiser in my training. Motivation-wise, I try to be an example to my children on how consistent training and practice can help them reach their goals. They haven’t gotten into running yet, but they both take music lessons and practicing their instruments makes them better musicians. Also, I try to mentor those that may have questions about running. I have someone that I turn to when I have questions about running and I try to do the same when a beginner is in need of advice. 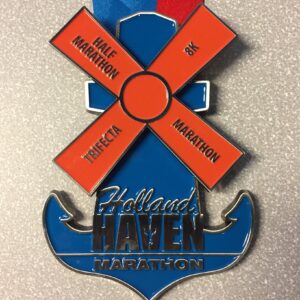 It is a fantastic trio of race distances. The feature a small (but growing) field that isn’t too crowded at any point other than the start and even that isn’t really crowded. I like to think of the races as the best of what Holland has to offer. A wonderful course that runs along the shores of Lake Michigan providing a flat, shady route (blueberry and bacon aid stations!). Food and drink from local companies for the after party, which also has stuff to do for the whole family. A charity partner (Camp Geneva) whose camp is on the marathon and half marathon course.

I have run the half marathon in 2015 and 2016, the marathon in 2017, and the 8K in 2018. I earned the Trifecta Medal (completing each of the 3 distances) last year. I think [race director] Eddie Kline is on to something by providing that medal, it gives runners a chance to earn something unique by coming back every year and expanding their goals.

If you are looking for a BQ, take it easy the first few miles. I have a tendency to go out too fast in my marathons and I blow up (mile 15 here in 2017). If you don’t have a time goal, enjoy the scenery. Too often we run as hard as we can and don’t appreciate what we have around us. The last tip I have is to make sure you give yourself plenty of time before the race to use the Porta-Potty. And when you are done, get back in line to use it again. 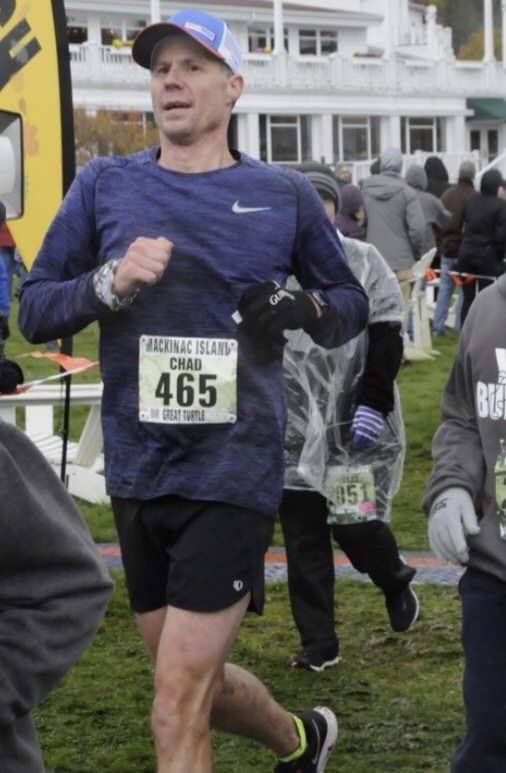 Mackinac Island is my favorite place in Michigan to run! Roads (with no cars!), trails, and neighborhood paths. Plus a ton of history. Every year my family goes in October to run the Great Turtle Race and go trick-or-treating afterward. You never know what kind of weather you’ll get there, so you have to be prepared for anything.

Up until a few years ago, I always ran solo. Then I discovered the Holland Running Club and another loose knit group of guys to run with a few times a week. It has made a profound difference in my running. My new running friends are the best cheerleaders, coaches, mentors and will do anything to help one another succeed. Last bit of advice: join a running group or find a few people to run with. It makes the miles go by faster!

Join Chad at the Holland Haven races! Use the code MRGHOLLAND12 to save $12 on your race entry. This is good for the marathon, half marathon, or 8K. Register here »