In 10 days, on Sept. 11, U.S. Navy veteran Mike Westerlund will toe the start line of his second 26.2 at the Holland Haven Marathon.

“To be able to do it on 9/11 with other veterans and first responders is exciting,” says Mike, a father of three who lives and runs in Muskegon.

As a member of Team Red, White & Blue, a national organization with the mission of enriching the lives of America’s veterans by connecting them to their community through physical and social activity, Mike found “motivation and support to continue to improve my running.”

“In the last year since joining RWB, I have PR’d every race and distance I have run within the last five years,” he says. “I cut at least two to three minutes off my 5K, 30 minutes off of 25K River Bank, 40 minutes off my half, and several others. I am very excited for the opportunity to run with RWB in the Holland Haven Marathon this year … I am also anxious and nervous to see how much I can improve my time. I really am grateful that [race director] Eddie Kline has helped provide this new and exciting experience.”

The Holland Haven Marathon and Half Marathon, which consists of road and bike paths rolling over beautiful hills and along Lake Michigan, is set for Sunday, September 11. Race founder Eddie Kline started the event in 2014 because “running along the lakeshore in Michigan during the summer is beautiful — better than in the city. Many west Michigan runners already run Lakeshore Drive and it makes sense to have a hometown race and run on home turf.”

Several members of Team RWB — and their family members — participated in last year’s event and will be back again this year, too.

Jeff Roley, whose oldest son is in the military and has helped him return to running in the past year, is among these runners.

“I am not military, but I am soon to be 66 and have only been running since last January,” he says. “As a college athlete (football) I was burned out on exercise and running in my twenties. I picked it back up in my thirties until I injured my knee. For 30 years I was inactive, until last Thanksgiving, when my oldest son, a Lt. Col, USA, medevac Black Hawk pilot challenged me to run with him this October in the Marine Corps Marathon with him.  He also suggested that I get involved with Team RWB since they had a local chapter — he is with Team RWB DC, where he works in the Pentagon on the Joint staff.”

Grand Rapids Veteran Outreach Director, with helping him prepare for the marathon he’ll run with his son.
“I now have close to 500 miles that I’ve run in prep, and Ben Foreman, my mentor and runner extraordinaire, encouraged me to run the Holland Haven Half in further preparation,” says Jeff, who is the branch director of Bethany Christian Services in Grand Rapids. “Three weeks ago I ran 15.1 miles (without walking), averaged under a 14 minute/mile pace. Nothing spectacular other than as Ben would say, ‘I beat everyone off the couch.’ I now love to run, I look forward to getting out, and the two best parts (besides the health benefit) are the closeness I now feel with my oldest son, and the comradarie with Team RWB.”
Mike Westerlund agrees that Team RWB’s impact is significant.
“I first met Team RWB at the expo for the Grand Rapids Marathon last year,” he says. “I then signed up to be an official member shorty after. Before joining RWB I would train and do most races by myself or with my three kids. Now going to different races to meet before, during, and after with RWB makes a huge difference. Being able to connect with likeminded individuals that come from somewhat similar backgrounds is huge. RWB has provided many more opportunities to experience different races and other social activities. I have done at least 6+ races with RWB in less than a year and I always look forward to the next one with them. For me, the fact that I get to meet with other members socially before and after races is great motivation. I have had the pleasure to do two different type of relay races with RWB. My absolute favorite was the FRED 200 Mile Relay in which 8 members ran a total of 200 miles in 33 hours. This was such a unique bonding experience.” 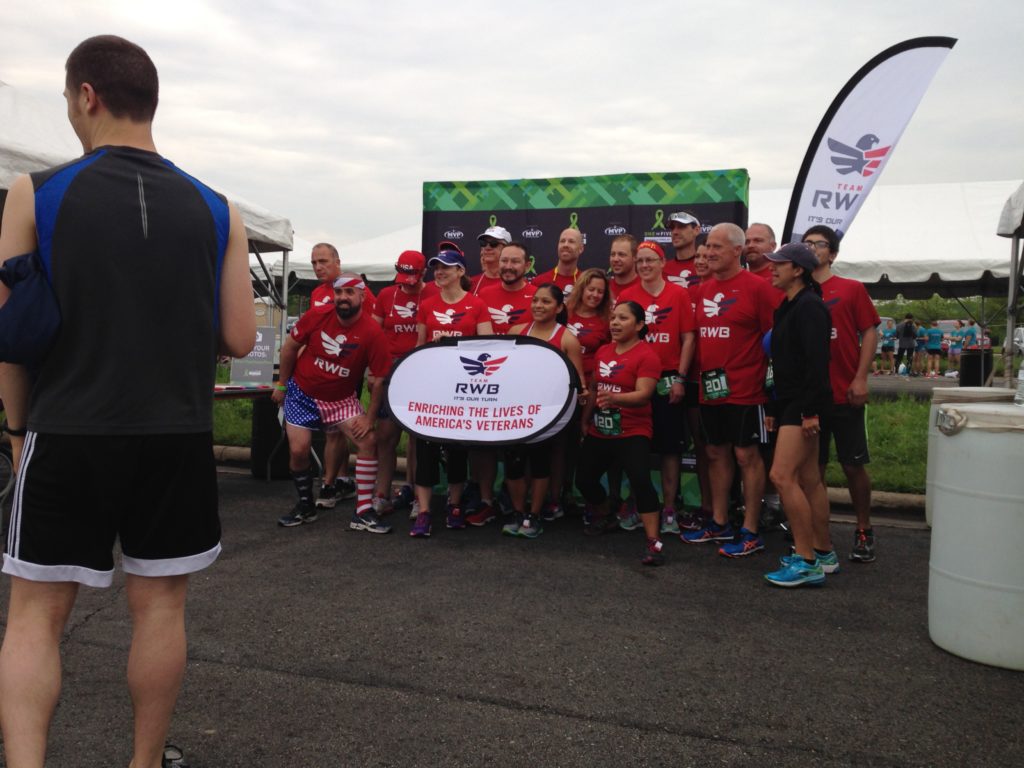 His involvement also has left an impression on his kids.

“I am also proud to say that my 16-year-old son joined RWB on his own and even purchased a RWB shirt with his own money,” Mike says. “Having him join has been very rewarding as I have watched him talk with other members and veterans to get to know some of their stories and military experiences. One of the first runs I did with RWB was at the Grand Rapids Veterans home. I brought all three of my kids who all ran 4 miles. They were all able to help donate items. They also were able to see and talk to a lot of the veterans who lived at the home. The veterans were so thankful and joyful to see the kids run for that special cause. It was truly a great experience for all.”

Registration for the Holland Haven Marathon and Half Marathon is still open and prices go up after today, August 31. Use this code — HEATHER — to save 15% off your race entry. For more information about the race as well as details on parking, lodging options, registration and more, visit the race site here »