Recently named the most scenic road course for runners in Michigan by MLive, the Mercy Health Seaway Run and Lake Michigan Half Marathon is a favorite among runners, including those who serve as pacers.

Just ask Grandville runners Dave Oosterman, 53, and Gail Riddering, 47, longtime friends who are looking forward to again helping runners achieve their race goals at this year’s event, set for June 25 in Muskegon. The friends make it a fun and lively experience for those in their pacing group — they’re known to bust out chants to keep everyone motivated.

“I became a pacer on a whim. Gail and I have a mutual friend who asked us if we were interested, Seaway 2014 was our first rodeo as far as being pacers,” Dave says. “We sang, we joked, we had a blast. I paced one race, Park2Park 1/2 later that year before I became injured.”

MRG caught up with Dave and Gail to learn more about their running journeys and what it’s like to be a pacer. Race organizers are seeking additional pacers for this year’s event, so be sure to click on the application listed at the end if you’re interested. And, MRG has two (2) race entries to this year’s event to give away — details on how to enter this giveaway at the end of this post.

The Pacer: Dave Oosterman, running since 1990. (First race: Fifth Third Riverbank 25K in 1991)
Pacing and Running: “After not being able to finish Boston in 2013 due to the bombings, I was a little apprehensive at races, especially Boston 2014. Seaway was one of the first races that I was able to focus on the experience and really enjoy the day in over a year, and I’ll always have good memories of that day and the pacing experience.”

The Pacer: Gail Riddering.
Pacing and Running: “Since Dave and I paced that race together, I’ll concur with his good memories of the experience. (I wasn’t in Boston 2014). But seriously, I love running. It’s my “me” time. Family, teaching, etc. — I love it all, but running is my time to ponder, reflect, and just enjoy. Staying in shape is a bonus … I am pretty much a life long runner — I’ve been running since I ran track in high school. Sometimes I like to say, ‘I ran when running wasn’t cool,’ meaning, there weren’t always a lot of women in some of the road races I ran in and running just wasn’t as popular back in the 80’s. I love the participation of women in today’s races! Another running friend of mine paces several races, and that’s how I became interested. She paced this race 2 years ago as well, just a faster pace.”

Dave: There are a lot of things I like about pacing. Free entry is a perk, of course. I also like helping others hit their goals, enjoying a more leisurely run while keeping the spirits of the group up to help them have a good day, and just being out on a pretty course with a whole bunch of new best friends.

Gail: What I like most about pacing is helping and encouraging other people to reach their goal or to reach the finish line. I enjoy begin able to run a race at a more leisurely pace so that I can talk, encourage … and, yes, we even did a “chant” at every mile. Dave and I do a version of the military chant: “We just reached mile 1″… Dave answers, then replies with something catchy. Then, we “sound off.” Runners catch on fast.

You both had a tougher year, health-wise. Can you talk about this some? And how did you both get back into running and wanting to be pacers again this year?

Dave: Early last year, I was doing some pretty intense training to race Bayshore in May, when I heard a pop. Long story short, I have a fully detached hamstring at the top. Surgery has a 9 month recovery with a 50% success rate, so I opted to rehab, go to PT, focus more on triathlons, and adjust expectations a bit. I was able to do the 70.3 Half Ironman in Muncie last July, but haven’t really been able to “race” running yet. I’m slowly ramping up my mileage with the intent of doing the 25K RBR again in May and the 1/2 marathon at Bayshore. It’s going well, but a little slower than I’d like, I’m being forced to learn patience. While we don’t think we can do a 9:30 pace or faster comfortably yet, we feel that we can be 10:00 min pacers based on where we are in our respective recoveries. We enjoyed it too much to hang it up, we’ll just slow down a bit! :)

Gail: My short version, 1.5 years ago, right before school started, I had tremendous pain in my back which I thought was … Well, I didn’t know. Muscle spasms? But, it didn’t go away and a few days later, when I attempted a 10 mile run, I couldn’t breathe. I diagnosed myself with pnenomia. (Yes, the doctors loved that.) I went to an urgent care facility hoping to get an antibiotic. That’s not what I got. I got an immediate trip to the ER where I was officially, this time, diagnosed with bi-lateral pulmonary embolisms –in other words, multiple blood clots in both lungs. I was immediately hospitalized and put on clot busting/blood thinning meds. (Except childbirth, I had never been hospitalized). I was released after a few days, but I couldn’t run for 6 weeks. When I could begin to run again, I had to “start over.” Sure, my muscles could have jumped right back to running, my lungs could not. I had to begin at 1 mile and I could only slowly increase — not more than an increase of a mile per week. The first time I tried to run 4 miles, I had to walk the last 1/2 mile. The doctors told me it would take 6 to 12 months to recover. They were right. My goal comeback race was the Gazelle Girl Half Marathon last year — 7 months after being hospitalized. I completed it in just under 2 hours. I was thrilled. I then ran the [Fifth Third] Riverbank as well. I have not been able to achieve the same running pace as I did before, but then again, age can be a factor too. So, that’s the short story. I am so thankful to just be able to run! It was definitely a humbling experience to be so tired and winded when trying to run. 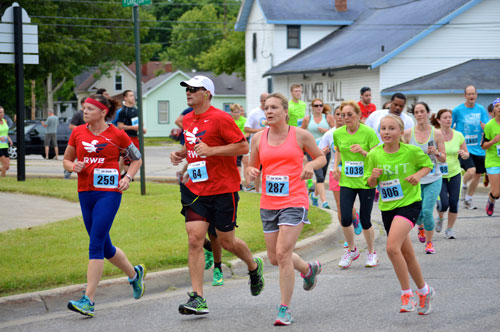 If other runners are considering signing on as pacers, what advice would you offer them?

Dave: Have fun! Your job is to make sure that your pace group is hitting their goals, and not focusing on whatever pain they are enduring. Be encouraging, keep it light, make it fun for your group. Offer encouragement, tell dumb stories, get to know your team. Running is a social sport, pacing is a fantastic way to meet new people and to give something back to the running community.

Gail: I’ve run many races with pacers. I think the key advice is to practice the pace and hit it from mile 1. Some people are actually running with pacers to keep themselves from running too fast at the start, some are running to try to run faster and steady. If a pacer is “off” on pace, even by 10 seconds in a mile, well, 10 seconds is a lot to some runners. I don’t appreciate pacers who finish the race in the goal time but do so by running faster/slower each mile.  My advice is to learn to run the pace every single mile. Dave and I will practice a long run at the mile pace we’re pacing. 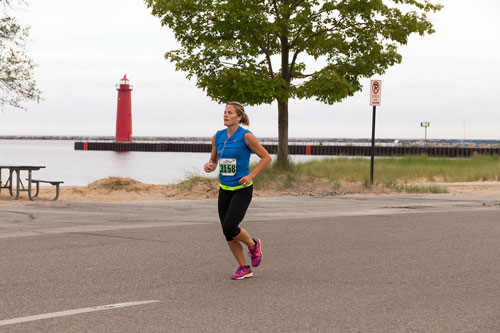 How would you describe the Seaway run for anyone who will be running this event for the first time?

Dave: The Seaway run is listed as one of the most beautiful 1/2 marathons in Michigan for good reason. Enjoy the course, take in the scenery, realize that you are running where people come for vacation. West Michigan is a jewel, and the Seaway run highlights the beauty. For first timers, remember that whatever time you run, it will be a PR. Don’t stress on your time or pace, focus on the fact that a 1/2 marathon is a major accomplishment.

Gail: It’s beautiful! I love running along the lakeshore! And, in places where the water can’t be seen, the neighborhoods are great. It also has a very nice start/finish area.

Interested in signing on as a pacer at this year’s Seaway Run and Lake Michigan Half Marathon? Alana Matyas is the pacer coordinator, and you can click here for the pacer application »

Race entry giveaway details: Two (2) entries to this year’s Mercy Health Seaway Run and Lake Michigan Half Marathon will be awarded to two readers. Winners will be chosen at random and can choose the distance they would like to run (half marathon, 15K or 5K). To enter this giveaway, please share below why you’d like to run this race along the shores of Lake Michigan in Muskegon. Winners will be announced here on the blog by Tuesday, April 5, 2016.