Chad Mahakian couldn’t resist the idea of chocolate at a race.

“How often do you get the chance to run up and down a ski hill and run through a chocolate tunnel?” says Chad, a 30-year-old runner in Farmington Hills, Mich., of last year’s inaugural Hot Cocoa Classic 5K & Marshmallow Mountain Mile held at Mt. Brighton. “It was too exciting an opportunity to pass up.”

That it was organized by Epic Races also played a role in his decision to do the event’s “Double Shot,” running both the 5K and the mile. “I have done a number of Epic races in the past — Sky Tri, Battle of Waterloo … — and knew that the Hot Cocoa Classic was going to be another well-run and fun event.” 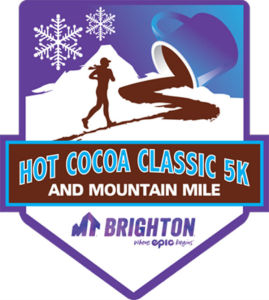 This year’s event, featuring a 5K, 1 mile and Double Shot (5K + 1 miler), is set for Saturday, Nov. 7 at Mt. Brighton in Brighton, Mich. All finishers receive a commemorative mug filled with hot cocoa and will enjoy Trader Joe’s sipping and dipping chocolate. Mt. Brighton will be selling shots of Bailey’s and Kalhua for $6 to participants 21 and over.

The overall course, say organizers, is “a beautiful mix of scenery on both the ski resort side and golf course at Mt. Brighton.” The terrain is mostly path with some fun trail mixed in.

“Prior to the race start, a cold front came through that brought in some very wet snow. It was very nice that Epic Races and Mt. Brighton had worked so well together to think of every weather condition and provided the runners with ability to be indoors and stay dry prior to the race,” he says. “Everything was very well organized — from the packet pick-up, to the markings on the course and the post-race chocolate party and awards.”

Chad, who ran cross country and track in high school and was a member of his college’s running club, says runners will like “the variety that the race provides.”

“The mile runs up and down a ski hill and the 5K takes place on a golf course — brought me back to my cross country days,” he says. “With a lot of races being run on pavement, it was a nice change of pace. In addition, runners will like the post-race celebration. Tri-Covery Massage was there last year and I believe will be again this year, providing runners with post-race massages. The post-race celebration also include delicious hot chocolate in a commemorative mug that you were able to keep. And the medals are very well designed and the cherry on top to a great event.”

Chad, who initially joined cross country in high school as a way to get in better shape for basketball — “but quickly fell in love with the sport and the lifestyle” — says running has provided him with “the chance to explore places that I would not have been able to if was in a car or other mode of transportation … Through running I have met some truly amazing people and have made long last friendships. Without running I would not have met my wonderful girlfriend.”

He offers these training tips for runners in interested in this race:

As of this week, fewer than 50 spots remain in the Double Shot and under 100 spots for the 5K.
The race’s charity partner is the American Lung Association.

Ready to sign up? SPECIAL MRG READER DISCOUNT: Use the code COCOAMRG2015 to receive 10% off your registration. Register here »