You can make the changes. You have to want it. You have to work at it, and it’s not going to come easy. But in the end, it will be totally worth it.

I learned of Scott Mindel, who lost 110 pounds thanks to running and healthier eating, through his wife Rebecca Stein-Mindel – she nominated her husband for the Governor’s Council Conquering Obesity Award, and she contacted me to not only share this news but also to let me know that Scott was a part of the MRG community and had been inspired by the stories of his fellow Michigan runners. I was so happy to hear this, and so impressed with his story. 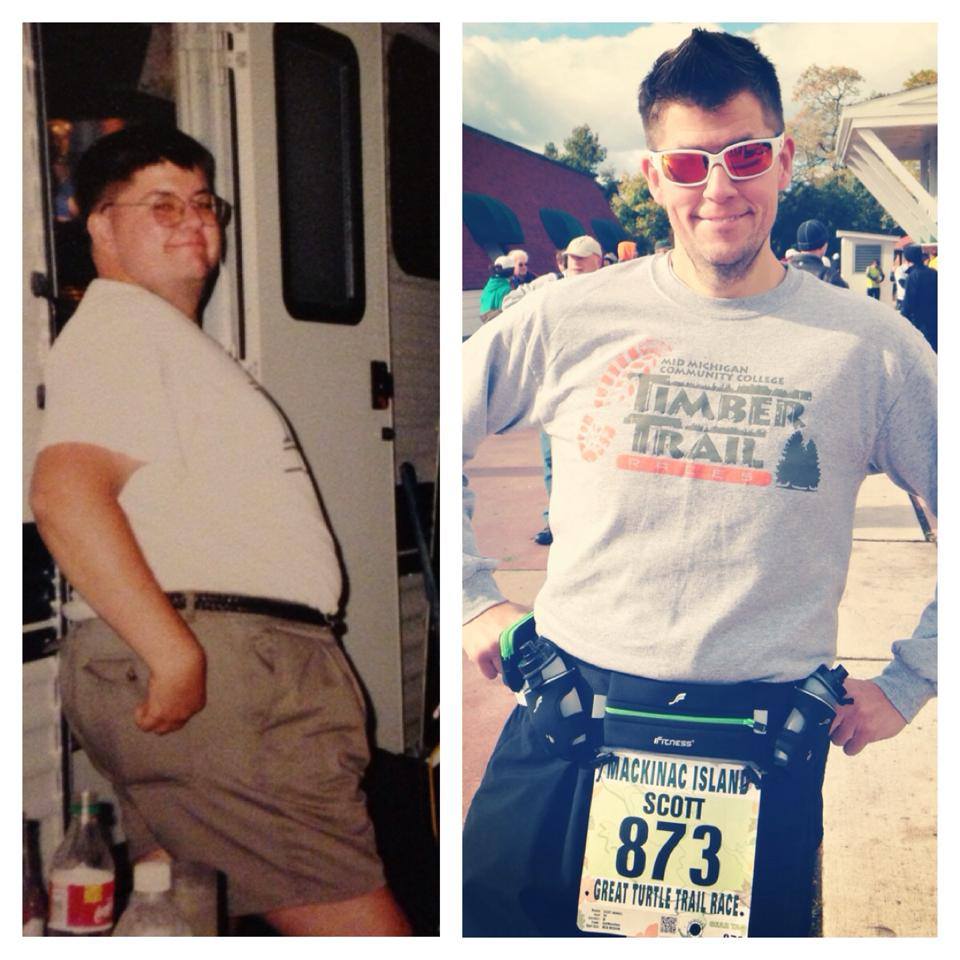 I wanted to learn more, about Scott and his amazing journey toward a healthier lifestyle, and also about Rebecca, who has taken this journey with him and also made positive changes in her own life as a result. This weekend Scott is running his first marathon, the Charlevoix Marathon.

“We are also doing the half-marathon during the Cherry Festival in TC, and in August we have signed up for the duatholon option for the Traverse City Triathlon races,” Rebecca says. “We haven’t completely figured out our fall races yet, though we are already registered for Grand Rapids Marathon in the October and I will also be running the Detroit Women’s Half-Marathon in September.” 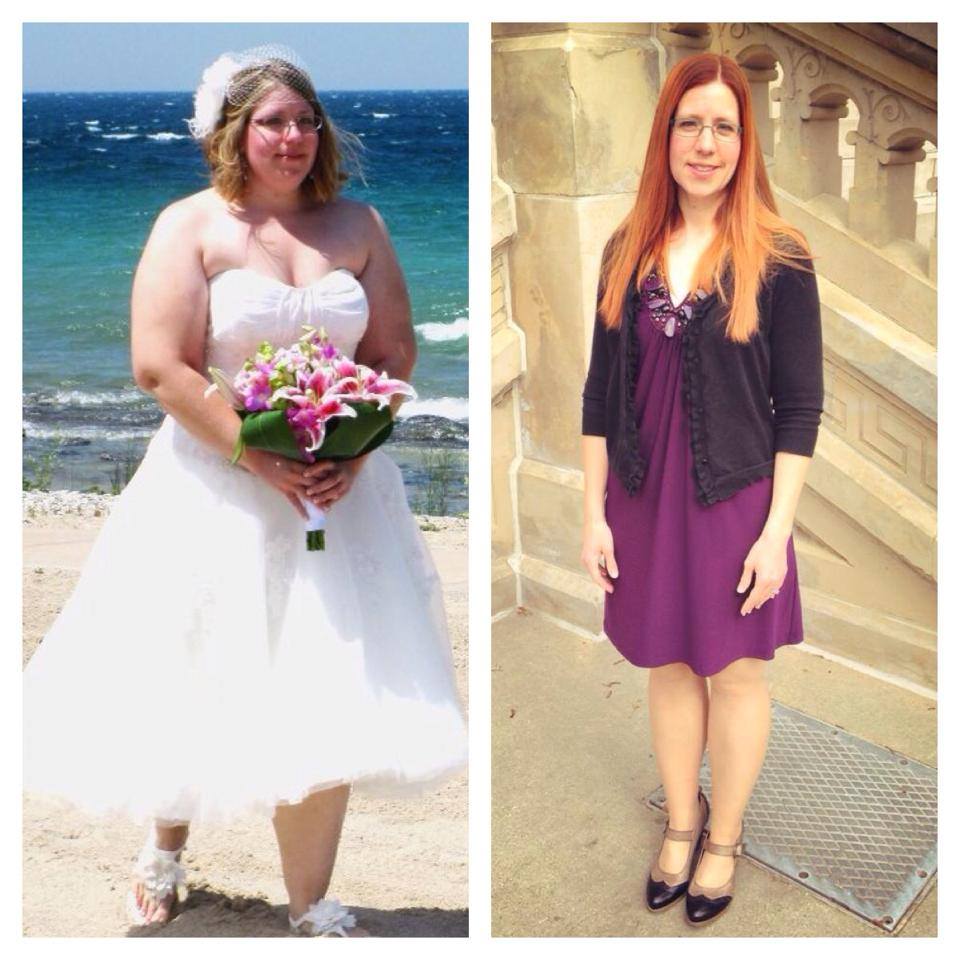 Basically, what we tell people, is we are real and there are no tricks or magic pills to losing weight – just hard work. Eat real, wholesome foods, cut out as much processed foods with chemicals as possible. Learn about benefits of foods and how to fuel your body properly and what a true serving size is.

Together, we have lost 210 pounds just by exercising (mostly running), and changing our eating habits. We have learned to adapt this into our everyday living and are now trying to teach our kids the importance of foods and how to choose them. We make as much stuff as possible from scratch. We get our organic meats locally and know our farmers. We participate in a harvest share and frequent the farmers market to get fresh produce throughout the summer. Planning ahead is key.

We have come so far. Both of us as kids were overweight and always just kind of accepted it. But we have changed that and started running. Both my husband and I could barely run 30 seconds with wanting to pass out, but we got stronger. At one point, I even told my husband I didn’t think I could ever be a runner. Well, something changed as we got stronger and it turned into more of a passion. Yes, we still are not super fast runners and we want to become stronger and faster, but it will come eventually. We will never be elite but getting out there to run, especially, running races together is so exhilarating!

We work opposite shifts so rarely do we get to run together, but we run our races together and finish hand in hand. It’s our journey that we take together, encouraging each other. We joke that all our dates are sweaty and dirty because that’s when we run together.

Over Christmas break this year, we decided to start a FB page, since so many people around us kept telling us how inspiring we are to them and that they love to see some more posts and whatnot. Since we have recently fell in love with running, we thought we’d post more on our runs over there than our personal page. We aren’t fast by any means, but it’s about the journey and that we are actually getting out there and doing it. There will always be someone faster than us!  But man, are races addicting or what?! 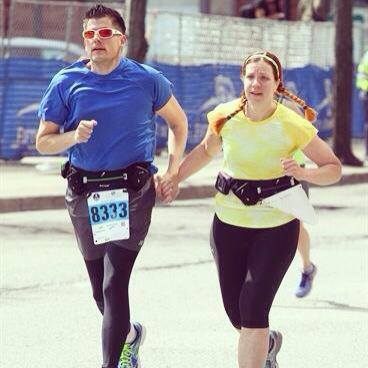 We haven’t really been running that long. My husband’s very first 5K was May 2012 and mine was Sept 2012. Then for 2013: St. Patty’s Day we did a 5K and shortly thereafter we did the Martian 10K, the Fifth Third 10K and the Highland Festival Road Race 10K. Just this past fall we did do the Crim 10 Miler, Brooksie Way Half, Bruckelaufe Half, MMCC’s Trail Run 5K, Great Turtle Half, and then we traveled to Nashville to do the Hard Rock Cafe Marathon.

Well, my husband felt he wasn’t ready for Nashville so he dropped to the half. I can be stubborn and figured I’d walk if I had to and I wasn’t changing, I did the full marathon! And yes, I had to walk quite a bit at the end but I did it!  We took a short break and then in January we did a 10K, February and March we did a half which these three races were part of the Winter Warrior Series in Mt. Pleasant. We also did the Irish Double race (8K, 5K) in Bay City.  … Ever since the Crim (excluding the Nashville race) my husband runs with me, and we finish holding hands. He says it’s more rewarding running together and so I think that’s why he sticks by me for the entire way, even though he is slightly faster without me.

You can follow Rebecca and Scott’s journey on their community Facebook page Off Into the Sunset, Our Strides into a Healthier Future »