(0)
I’ll admit that several years ago, costumed races weren’t really my thing. I didn’t have anything against them; I just didn’t get into them. When I signed up for one, whether it took place around the holidays or followed a festive or silly theme of some kind simply for the fun of it, I admired my fellow runners’ costumes — and pretty much stuck with my own traditional running clothing and gear. It seemed easier that way, and most comfortable, I told myself.
But then something changed as we signed up to run various “costumes optional” and “costumes encouraged” 5K races. We got into it. A little zombie make-up dabbed onto our faces, a superhero costume or five thrown on (our dogs included, too), some matching Fourth of July red, white and blue adorned … yep, we got into it, alright.

And it’s been a lot of fun. Clearly we’d been missing out.

While we’re certainly no where near the level of some seriously clever and creative runners out there who truly go all out, I’m happy to say that we’re experimenting a bit more and have realized that costumed races are in fact all that they crack up to be. They make for memorable running experiences, not to mention stellar racing pics. Next up for us: the Traverse City Zombie Run, an up north race tradition eight years running. This will be our third one together as a family. We’re figuring out how exactly we’ll dress up, to top last year’s Spartan Zombie look we went for last year.

I checked in with TC Zombie race founder and director Matthew Ross to hear how things are shaping up for this year’s event, which is set for Saturday, Oct. 29 at Right Brain Brewery in Traverse City. “Things are going well,” Matt says. “Putting on a run like this takes a lot of time. I thought it would get easier, but it really doesn’t. I tend to handle all the race details myself so it’s a lot of work, but very gratifying as well.” 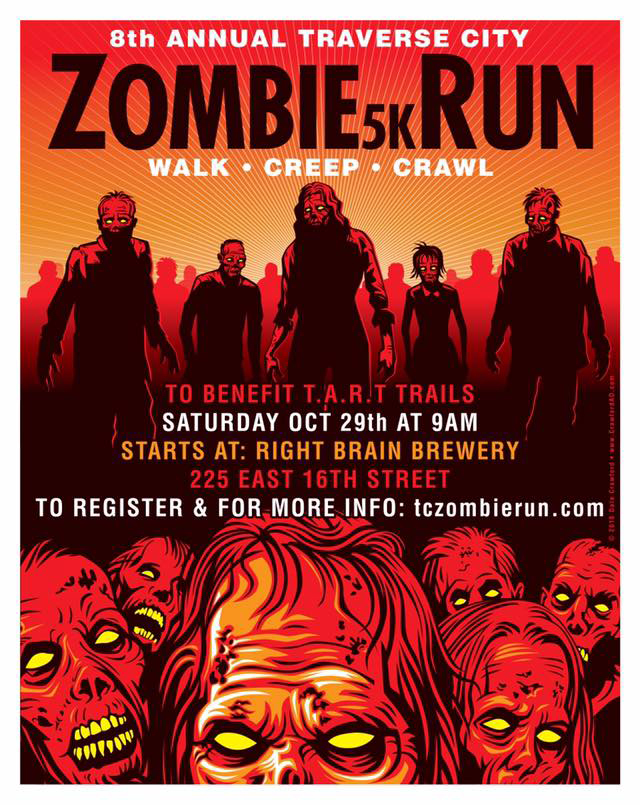 Proceeds from this event go to TART trails, the local trail system here in Traverse City. “We have raised over $100,000 for TART over the last seven years,” he says.
As for the 5K course, it remains the same as last year, with the run starting and finishing at Right Brain Brewery. “I had thought about doing a evening run at some point, but I didn’t think the city would be supportive of that. We have a lot of families that run and a night run probably wouldn’t be good
for them.”
Many of the race sponsors are returning once again this year: Right Brain Brewery, Interlochen Public Radio, Meijer, WKLT and Williams Honda.
“This year we will be bringing awareness to ALS in honor of Dr. Michael Barry a local physician who passed away from the disease in 2014. He was an amazing and caring physician that I got to know at Munson Medical Center. He was a big fan and sponsor of the Zombie Run. We also plan on doing some pre race contests for prizes. So far we are planning a scream contest and a body bag race. Planetary Coffee will be there as well for all those who would rather have coffee than beer. Plus RBB will be doing happy hour pricing after the race as well. Once again we will be giving out some great prizes to the best adult, children costumes, and group costumes.”
The Traverse City Zombie Run typically attracts about 1,300 runners each year. “I have always had a number in my head that we are still trying to achieve — 1,500 online registrations,” Matt says. “The closest we have come to that was 1,218 in 2013 … We have always been amazed by the support that we have had. I think the attraction is a combination of raising money for a great nonprofit — TART — as well as Halloween and people just love dressing up!”
The TC Zombie Run is looking for volunteers, Matt adds. “The city feels that we can manage the Zombie Horde alone this year without the help of the TC police, so we will be needing some brave people out there. No experience needed but survival skills are a must!”

Learn more about volunteering and how to register here »

Do you run a zombie or Halloween-themed race each year? What’s your favorite one in Michigan?

A few other spooky races in the Mitten to check out this fall: 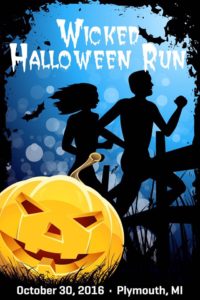 The Wicked Halloween Run 10K, 5K & Monster Mile on Sunday, Oct. 30 in Plymouth — billed as the “largest Halloween run in the state” — attracts thousands of runners, many in costume, to the streets of Plymouth. This family-friendly race is organized by Kona Running Co.

This race also features a Kids’ Pumpkin Patch Trick-or-Treat 1/2 mile and 1 mile Fun Run (children 12 and under). This event showcases Bishops Bog Preserve and Eliason Nature Reserve in Portage, Mich. Both the 5K and 10K are capped at 300 participants each.
Use the code MRG2016 to save $5 off registration. Learn more and register here »