On any given Wednesday evening in downtown Muskegon, a mismatched group of people gather outside Pigeon Hill Brewing Company. Dressed in neon oranges, dayglow pinks, brilliant yellows and enough LED lights to catch the attention of passing drivers, these individuals hop up and down, huffing into their hands as voices call out numbers indicating how far each intends to run. Brewery patrons and downtown customers shoot quizzical glances at the group, no doubt thinking that only truly crazy people voluntarily run at night in the dead of a Michigan winter. Once a route has been agreed upon, the pack departs from the parking lot to the chiming of a few dozen GPS watches.

These are my people — men and women who carve out a chunk of time a few times a week to run. We are Run Muskegon, a group of runners dedicated to supporting healthy, active lifestyles in the Muskegon area.

When I joined Run Muskegon 18 months ago, I had just moved to the area and sought a way to continue my running habit. Nervous about running solo in a completely new area, I knew I needed to break of out my introverted shell and find some runners. I was welcomed into the group, quickly falling into the cadence of their regular Wednesday night and Saturday morning runs.

The group, established in the summer of 2011 by Alana Matyas-Bower, boasts an eclectic mix of abilities from full marathoners to recreational runners to beginners. “I moved here and didn’t know anybody. I was used to running with a group in Chicago, but I quickly found out there wasn’t a running group so I made my own,” says Matyas-Bower. “It began with just Wednesday nights on my own. After the coverage with the bike trail last winter, we really started to grow.”

Run Muskegon often turns to the Lakeshore Bike Path in the winter months as a safe running route; much more preferable to running alongside traffic on slippery and snowy side streets, dodging potholes and patches of black ice. However, record snowfalls and weather conditions last year made navigating the bike path impossible for most pedestrians and runners, making outdoor activities hazardous. “I was always worried about somebody potentially getting hurt and I just wanted to focus on providing a safe route for our runners,” recalls Matyas-Bower. “This is what really started the idea (about the bike path).”

The group’s fondness for the bike path and a desire to facilitate safer winter running, led to a grassroots fundraising effort last winter. Run Muskegon first received a $500 grant from the organization 1 in 21 to clear the bike path. Soon realizing that the grant wasn’t enough, Matyas-Bower and Run Muskegon turned to social media to appeal to the community for support. Through generous donations, the 2014 Bike Trail Fundraiser accumulated just over $1,200 to plow snow from a 2-mile stretch of the bike path, between Fricano’s Place and Fisherman’s Landing. Many of the donations were from local businesses, but Run Muskegon’s leader Maytas-Bower also turned to crowdfunding using Indiegogo.

Not long after the plow truck took it’s first swipes to clear snow from the bike path, some of the regular members of Run Muskegon began to look for ways to sustain this effort for years to come.  Through the generous donation of legal services, Run Muskegon is seeking 501(C)3 status as a nonprofit organization and launching its first annual Shamrock Shuffle 5K to continue to fund future snow removal efforts on the bike path. 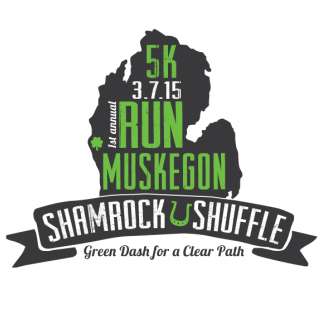 The Shamrock Shuffle 5K, to be held on March 7th at Fricano’s Place in downtown Muskegon, will be a unique racing event for West Michigan runners, offering many perks to attendees.  “Usually first year races are very low budget.  It will be chipped time by Runner’s Edge Timing and our shirt is a long sleeve tech shirt.  These perks aren’t usually found at first year races.  We are a running group and we want to attract runners and put on a serious running event,” said Matyas-Bower.  Many members of Run Muskegon have jumped in with both feet to help organize the event, seeking sponsors, finding volunteers, and offering input.  The course will feature the Lakeshore Bike Path section that is currently funded to be plowed, offering views of Muskegon Lake and downtown Muskegon.

Twice a week, Run Muskegon pounds the pavement around the Muskegon area, with our hot zones primarily on the Lakeshore Bike Path or around Bear Lake. Some members run simply as a part of a healthy lifestyle. 1 in 21 Healthy Muskegon County, a result of the Greater Muskegon area being selected as one of the “Wellville 5,” has brought in more community members seeking friendly support for physical activity.

Other runners use the group for motivation and accountability, forming training pods with long distance races in their sights. Currently, several members are training for the Kalamazoo Marathon and the Fifth Third River Bank Run 25K in May. These are the runners who lead the tempo runs and speed drills, and share their acquired knowledge. When another member has a question about training or injury, “It’s nice to see some of our runners step up and help other runners — training, speed work, workouts,” says Matyas-Bower. Locally, the bright red Run Muskegon tech shirts are easily spotted at 5Ks and other races around Muskegon and Ottawa counties.

Run Muskegon has even put together a 5 weeks to 5K training plan. “We realize there are a lot people who get intimidated about joining a running group. They are a little nervous about being able to keep up with the team. So we have put together a training plan with our traditional Wednesday and Saturday runs,” explains Matyas-Bower. “A  few group members will stick by any newbies who come out to join us. Anyone and everyone is welcome to join us.”

Have a free Wednesday evening or Saturday morning? Take that first step with a group of committed and supportive community members who are ready to toe the line and have fun. Whether you are looking for your first 5K or your 50th, the Shamrock Shuffle 5K will be the race to be at in March!  Come and join us to “Run Muskegon”!

Courtney Hansen is an avid runner, teacher and mother. She has completed a 25K, six half marathons, and countless 10K and 5Ks, placing in the top three in her age group in the majority of the races over the past few years. Courtney aspires to qualify for the 2016 Boston Marathon and making the 2:00 Club for the Fifth Third Riverbank 25k. These goals are the driving focus of her current training regime. Courtney is a member of Run Muskegon, Grand Haven Running Club, the Oiselle Flock, and a Nuun ambassador. She blogs at Running in the Mitten. Read more about her running story here »