One of my most favorite Traverse City running routes is the Boardman Lake Trail, which runs along the east side of the lake next to the public library. Built in 2005, it’s a two-mile, heavily wooded trail with the northern mile paved and the southern half consisting of crushed limestone and boardwalks. Throughout your trek you’re treated to views of the water and waterfowl — this is a quiet, no-wake lake that at its northern tip spills into the Boardman River and eventually leads to West Grand Traverse Bay. In other words, it’s especially serene and picturesque, and last week it was just the kind of route I was seeking on a cool October morning.

I hadn’t been on this urban trail in awhile, and I’ve been eager to see progress of the trail’s long-anticipated expansion — the western portion of the Boardman Lake Trail between Oryana, Traverse City’s local food co-op, and 14th Street is currently under construction and is projected to be completed by the end of this month. TART Trails is working with the city and Lake Ridge Condominiums on this. (Read more about trail developments here »)

Early on in my training for my first marathon, back in the fall/early winter of 2010, I ran the Boardman Lake Trail quite a bit. For my longer in-town runs it was a good way to tack on a few extra miles. To add some adventure, I’d run all the way around the lake, but had to get creative to do so. It meant running a short stint on busy roads (South Airport and Cass roads), which isn’t ideal, especially on snowier, slippier days. Train tracks on the western side of the lake can be navigated, but it’s definitely not my preferred terrain. Which is why I am so excited to see this around-the-lake route take shape.

The vision for this trail is a pathway that circles Boardman Lake, granting easy access to the library, parks, residential developments, and commercial areas including local businesses like Oryana. The future loop around the lake will provide connection to Northwestern Michigan College’s University Center and ultimately head along the Boardman River south of South Airport Road providing connections to the Boardman River Trail.

Last week, I started my run at the northernmost point, next to the Depot businesses off Eighth Street. I turned left at the pubic bathrooms and ran the path between the library and the lake. 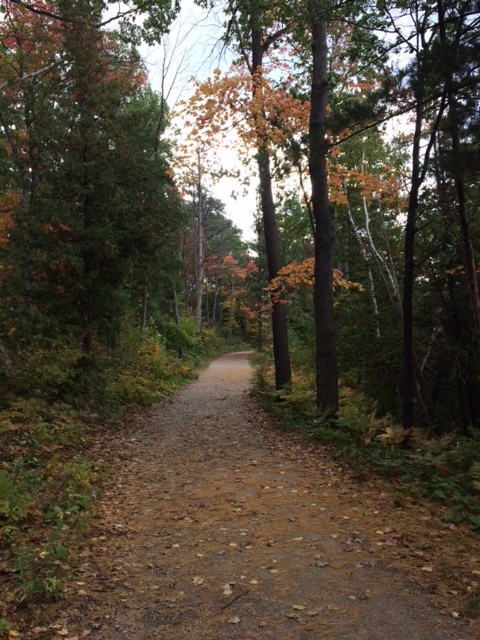 After pausing for a short time at Logan’s Landing, to soak up the view, I kept going along South Airport Road. (A busy road, to be sure. Please be careful if you take this route.) I stayed to the right — this is a divided/boulevard-like road — and as soon as I could, at the top of the hill, veered to the right behind a number of local businesses and train tracks that run parallel to the lake. I took a few paths in the woods before emerging at the parking lot of the University Center. I ran through the lot and found another path at the far end that took me toward more train tracks.

I followed this for another mile or so, eventually coming to a residential/business area (Right Brain Brewery is here in this spot, for those of you who are Michigan craft beer fans!). I continued on, past condos and Fourteenth Street (there’s a path that runs behind the condos). Eventually I came to the paved path that leads between the Boardman Lake Bridge and Oryana. 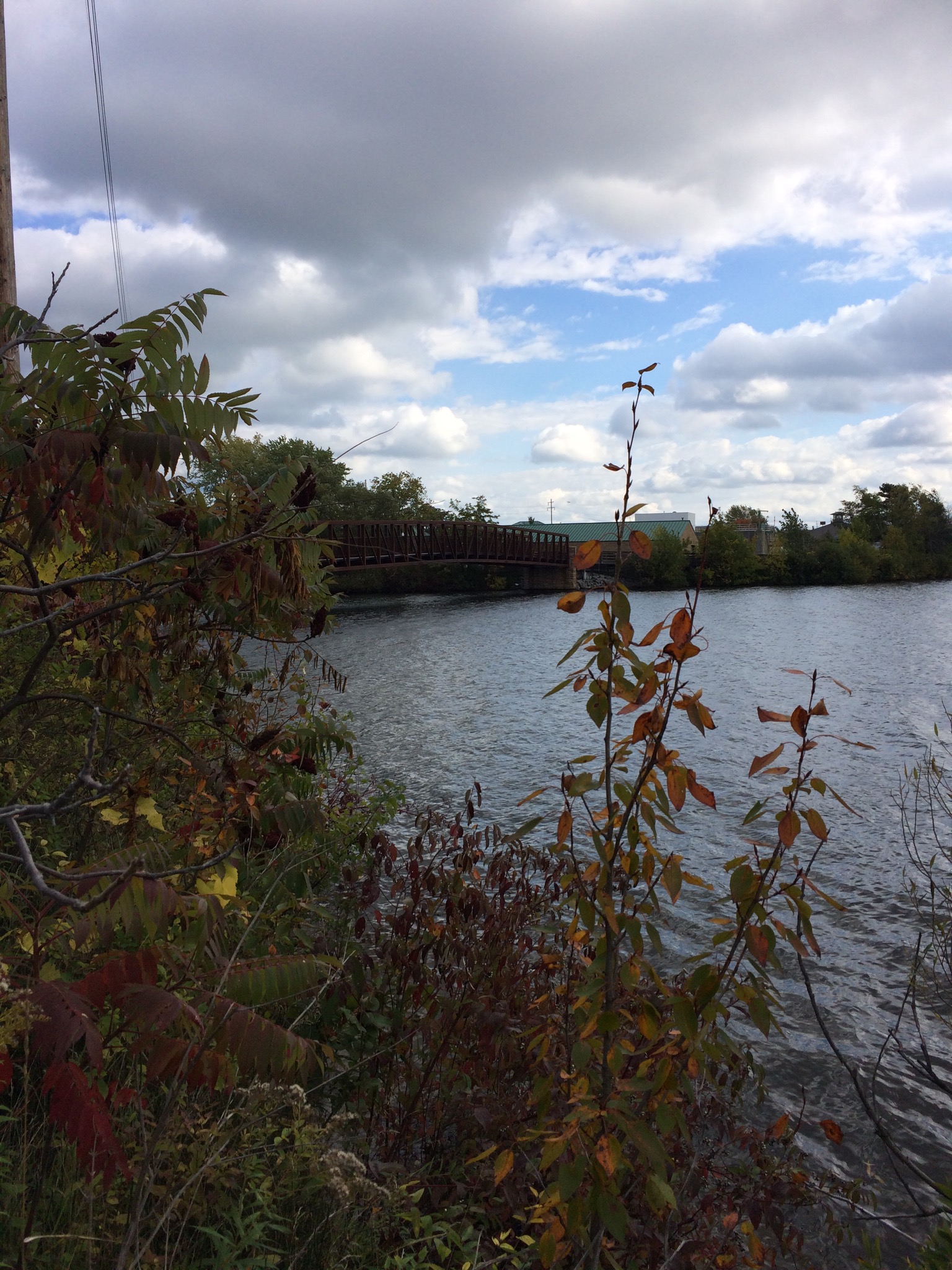 I double-backed some to take a closer look at the new section of the path. It’s coming together well! 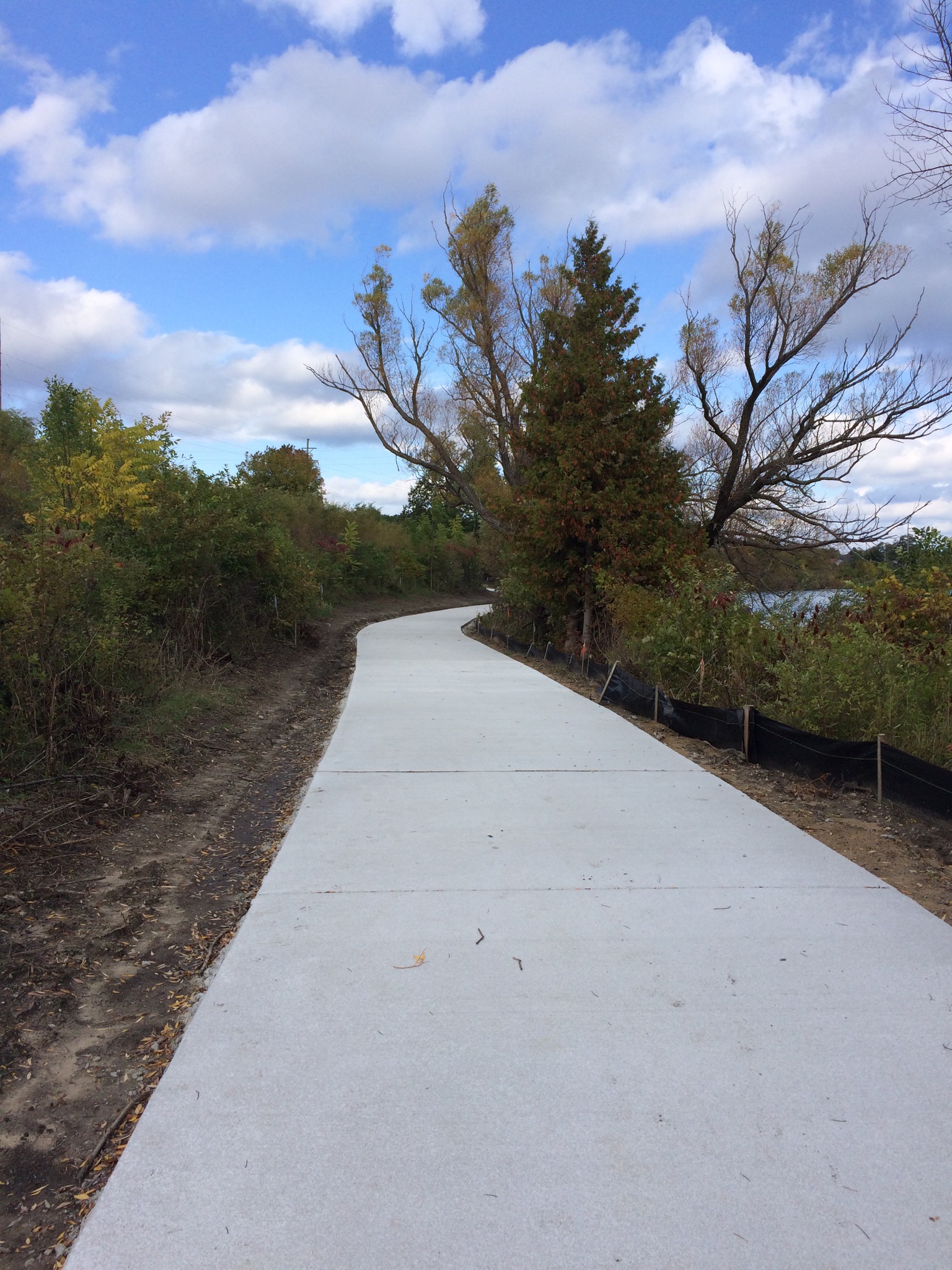 After crossing the Boardman Lake bridge it was less than a half mile to my parked car. I ended up running about 5 miles. I couldn’t wait to eat lunch and after grabbing a change of clothes, I walked over to the family-owned The Filling Station Microbrewery. It was relatively quiet in the restaurant, which was nice. A few other diners sat in the causal dining area overlooking Boardman Lake (there’s great outdoor seating along the length of the depot building during warmer weather.) The Filling Station has a good selection of brew — there’s a rotating list of at least 10 craft brews — as well as delicious flatbread pizza and salads. I ordered a fabulous flatbread pizza with red onions, blue cheese, BBQ sauce and chicken (you can see more of the menu here; it changes seasonally). I also ordered a pint of their “Track #11” Bentley Oatmeal Stout. So very good. 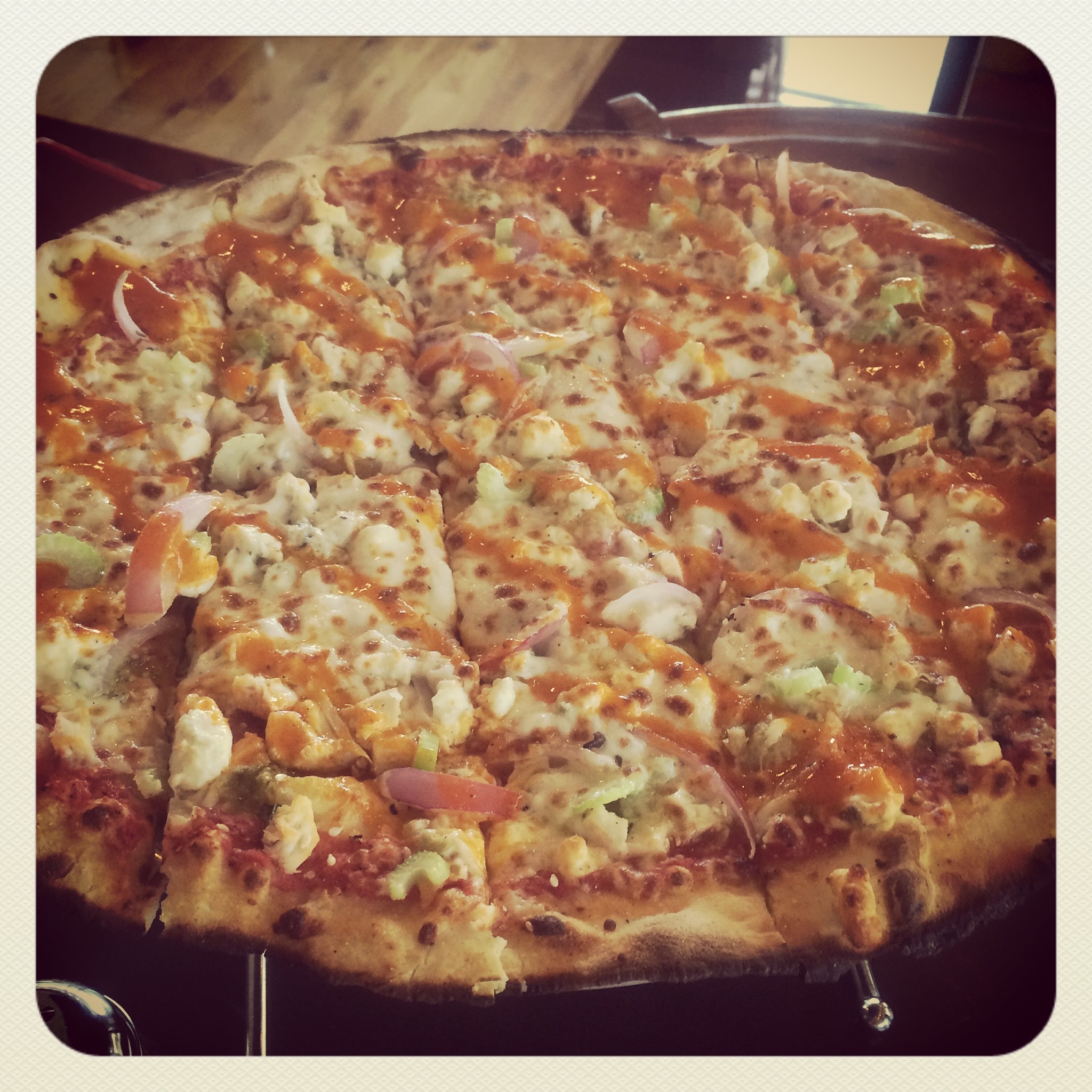 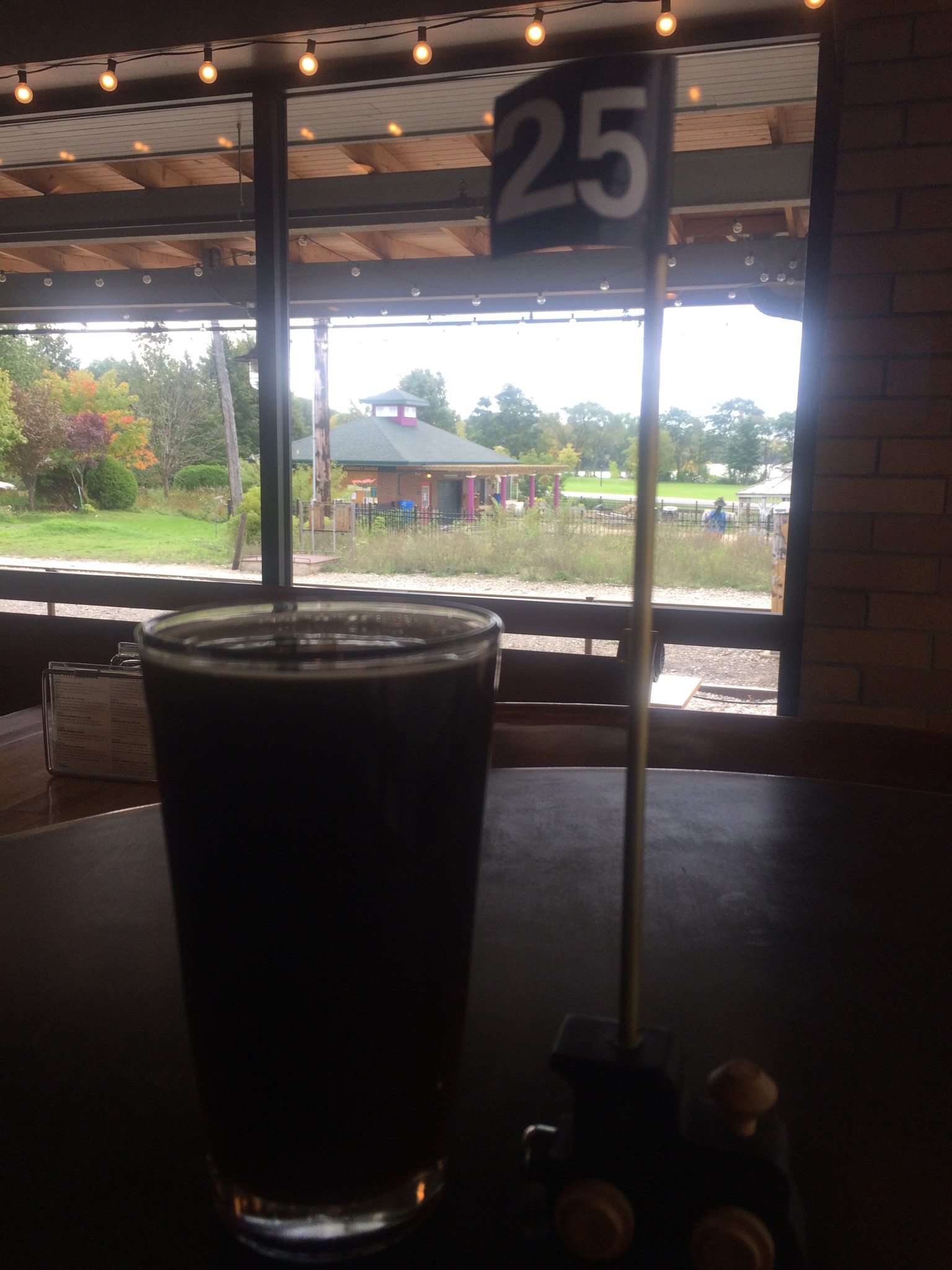 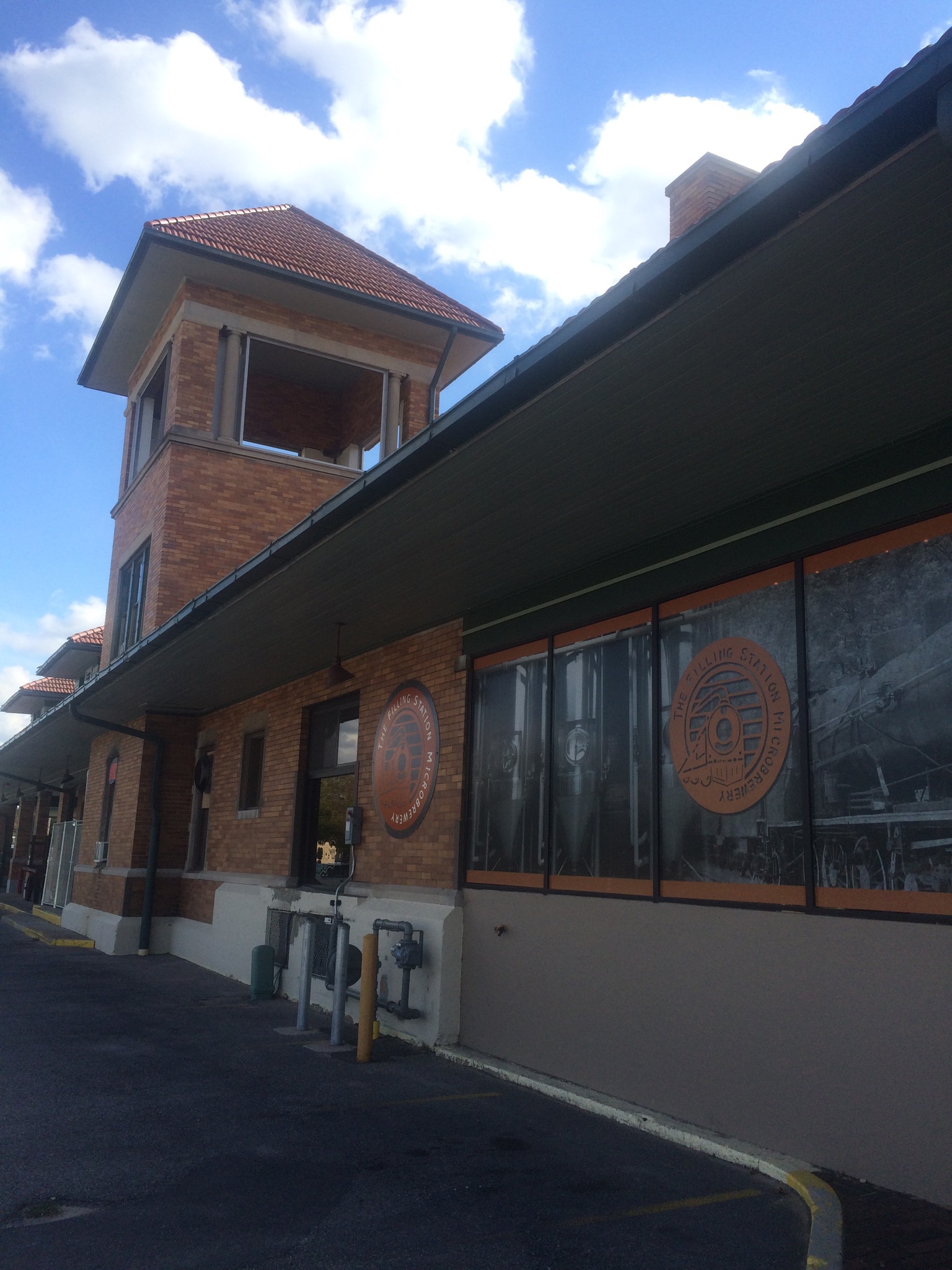 IF YOU GO: Access and parking at the north end is off Hannah Road just south of the Traverse Area District Library, and at the south end from Medalie Park in the Logan’s Landing area off South Airport Road. I opted to park in the Depot parking lot given I planned to have lunch at The Filling Station Microbrewery afterward.

Have you run the Boardman Lake Trail? Do you have a favorite flatbread pizza and brew at The Filling Station?