I first heard about the Snow Moon Trail Run when Kevin Fowler (one of the race directors), was a guest on the MRG podcast. This race, which took place earlier this month, sounded cool — literally! Picture running through the forest, under a full moon (called the “snow moon”), in the evening. And here’s the kicker: in February, in Michigan. And, not just any night in February — the eve of my birthday, on Feb. 11.

I LOVE to run on my birthday anyway, so when I can get a race in there too, what a treat! The race was going to held about two hours south of Traverse City in Midland, so I thought… hmm, maybe I can get some friends to run with me and make it a birthday celebration/girls’ weekend. I sent a message to my two BRFs (best running friends); one of them lives in Grand Rapids (Erika) and the other (Stephanie) outside of Detroit. And they instantly replied YES! Coincidently, I met both of these amazing women through MRG (thanks, Heather!) So, we decided to meet in Midland, get a hotel, run a race and have a blast!

We decided to meet at around 2 p.m. on Saturday for some pre-race fueling (and hydrating). We all had about a two-hour drive and so we met at the Midland Brewing Company (one of the race sponsors.) Erika and Stephanie had never met before and got there before me, but of course, found each other right away! We needed some good carbs so ordered the Colossal Bavarian Pretzel (which was literally bigger than my head, seriously check out the photo), and just in case that wasn’t enough, we got an amazing cheese, roasted garlic and prosciutto flatbread and then indulged in some beer (Dublin Street Stout and Copper Harbor Ale).

Then it was on to packet pickup at the Eagles Club, about a ¼ mile up the road from the race start. Packet pickup was super convenient, quick, with really friendly volunteers. We got our bibs, our super soft, really nice t-shirts (women cut XS for me that actually fit perfect!) and an awesome pint glass.

Then we headed over to our hotel. Stephanie found a great rate at the Baymont Inn, which was a quick ride from the race start. We had to laugh as we pulled our duffel bags (and other items) out of our cars — it looked like we were planning on a weeklong vacation instead of just an overnight race. You know us runners love to have clothing and footwear choices. Especially when we had no idea what trail conditions were going to be like. My two lovely friends also came prepared with awesome runner birthday presents: chocolate, blueberries covered in chocolate, a SWELL water bottle and an awesome “pink” MRG hat. (I am NOT a pink person but by the end of the weekend I was loving my pink hat <3)

We settled on clothing choices and footwear and headed off to the race. I decided on running tights, long sleeve fleece, hat, gloves and running vest. And for footwear, I went with my awesome GORE-TEX trail shoes, and thanks to Beth Price and Kahtoola, I was rocking my borrowed NANOspikes. We also needed illumination as it was night and dark, so I went with a headlamp and a handheld runner flashlight. On the way to the race, we decided to stop at a party store and pick up a few post-race beverages, as the race allowed BYOB! (There also was the option to buy beer from the Eagles Club.)

We got to the start and parked at the Eagles Club. They had a shuttle van driving runners to the start, but we opted to walk it as our warm-up. The race offered three distances: 5K, 15K and 25K, all taking place on a 3-mile loop through the forest. Your choice of running it once, thrice or five times. I opted to run the 15K with Stephanie so we could chat and keep each other entertained. Erika was going to race the 25K (and race it she did … rockstar alert!) The temps were pretty good, around 32 degrees, and it was forecasted to stay around that for most of the race.

The event had a staggered start, with 15K and 25K racers lining up first at 6 p.m. followed by 5K racers 10 minutes later. It was a good-sized race, kept small with 300 people (with a waitlist of almost 100!) to ensure room to run in the forest. And then we were off … 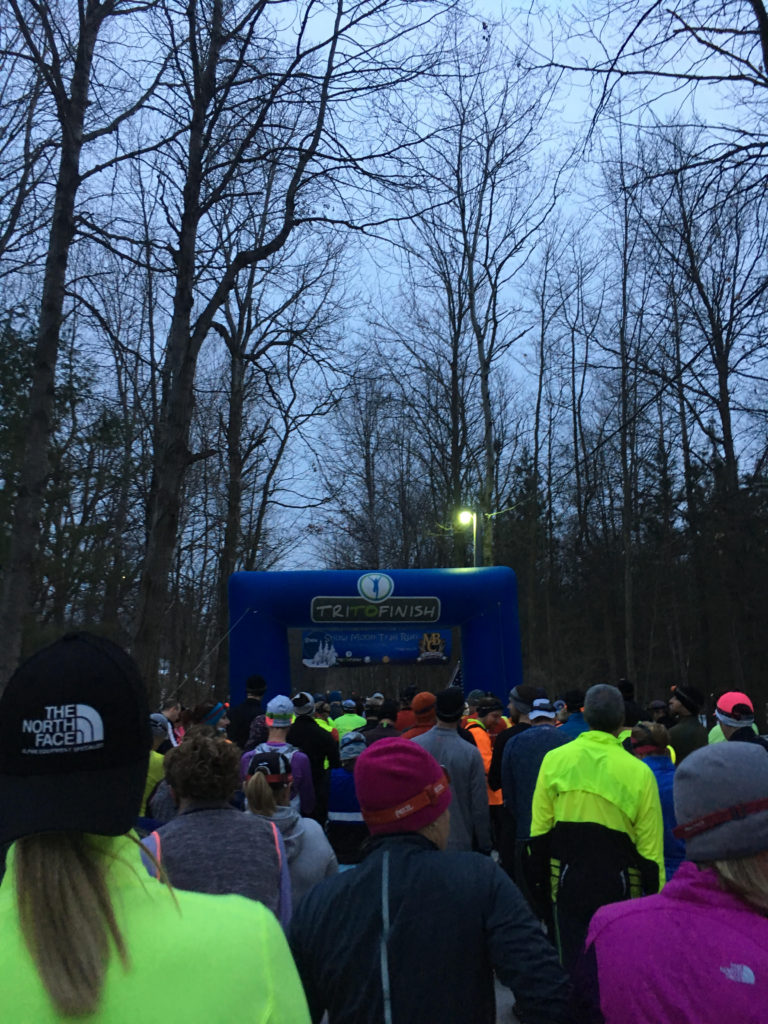 For the first loop it was still somewhat light out, as sunset was around 6:08 p.m. This allowed us to get a good look at the trail conditions, which was a mixed bag: we started with some slushy, sugary snow and then hit some patches of glare ice. It then changed to some muddy puddles, roots (or twigs, as I liked to call them), and then back to snow. My shoe traction and GORE-TEX shoes proved invaluable!

The next loop was dark. But along the trail in the trees were these lovely little LED lights, not so much for illumination, more for ambiance and trail marking. I forgot to mention the awesome aid station at the halfway point on the trail. You actually got to pass it twice on the loop (although it wasn’t until the second time through on the second loop that I realized it was not a second aid station but the same one … I am goofy that way!) Stephanie and I cruised along at a nice conversational pace, and I kept my eyes on the trail, not wanting to wipe out or get lost. Our headlamps and flashlights were great. And the NANOspikes were awesome at keeping me upright. We kept looking for Erika, thinking she would fly by us, but never found her. Another cool feature of the race was after each lap you got to race through the finish tent and then back out for another lap. This was great as the spectators could hang out under warm heaters in the tent and cheer you on.

Back out for lap #3 and still feeling great. We cruised along and before we knew it we could hear the music from the tent and knew we were almost done. Part of me wanted to keep running but the other part said time for a beer! Stephanie and I crossed the line together, and got our medals (which were really nice!) and then went to watch the rest of the runners cruise through the tent. We kept our eyes out for Erika. Sure enough, not too long after we finished she came through on her 4th lap, looking strong, and then a few minutes later her 5th and final lap, still looking strong!

We all had a beer and toasted each other and waited around for the awards. Since it was a small, first-year race, organizers opted for first-, second- and third-place male and female for each distance, but no age group awards. The awards also were really nice looking. 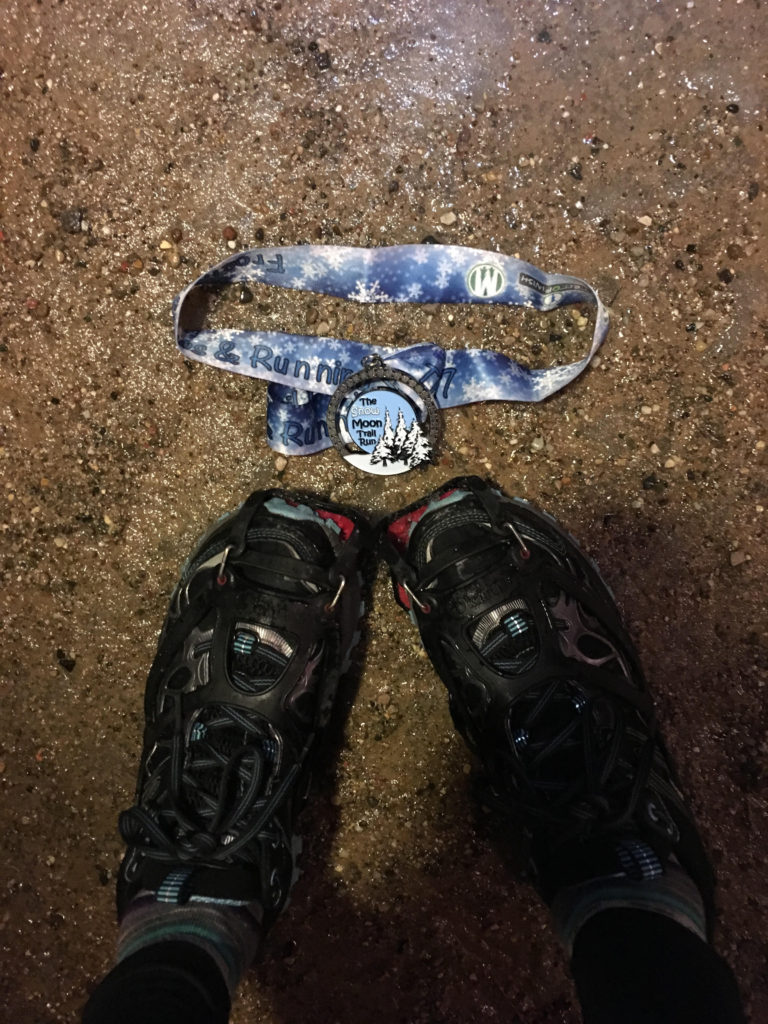 We packed up our bags and headed back to our car at the Eagles Club, not looking forward to the cold walk, and like a mirage of water in the desert … the shuttle van was waiting, warm and cozy.

Now it was time for some post-race refueling. Erika found a great place in downtown Midland called the Whichcraft Taproom. They had an amazing beer list. Erika and I went with Michigan Porters and Stephanie went for a Michigan Bourbon. But the best was my post-race meal choice: Grilled peanut butter and jelly (with Michigan blueberry jam) with potato chips and onion dill dip! Perfection. 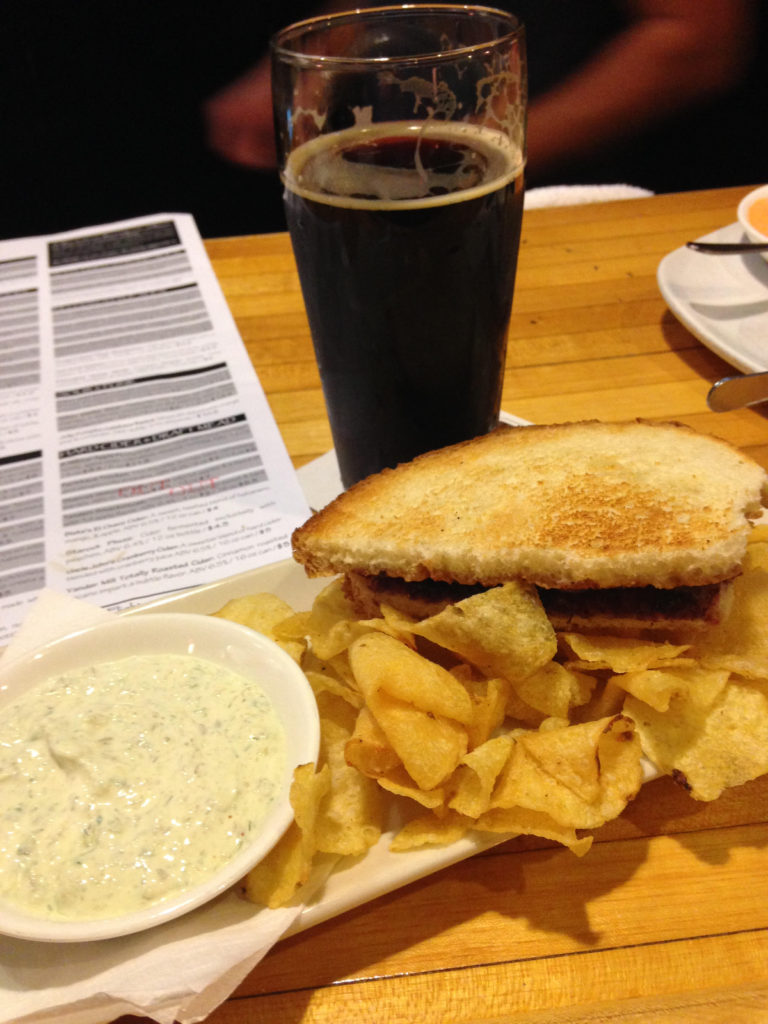 Back to the hotel, for lots of laughs and not much sleep. We woke up to snow in the morning, and decided we needed some really good coffee, so I found Espresso Milano, around the corner from Whichcraft in downtown Midland. And then we got in each of our cars and took off north, west and south.

Overall, it was a great race experience. Awesome volunteers, great course, cool swag and great vibe! Kudos to TriToFinish for a wonderful event. Not sure when the Snow Moon will be next year, but I would love to run this race again … 25K for sure next time!
—

Ali Lopez is a northern Michigan runner, chef and health coach. You can learn more about her at her web site Healthy Chef Ali. She’s also on Facebook here »

Ali is the author of the popular Friday Fueling series here on MRG. Recent posts include Healthy Super Bowl snacks and a different (delicious!) take on traditional chili. She is currently training for her first Boston Marathon this spring. Meet Ali — and learn some of her culinary tricks — during the second annual Michigan Runner Girl Weekend Retreat at the Grand Traverse Resort and Spa this May 4-7. Learn more here »