Runners from around the country gathered this past Saturday to kick off the Coast Guard Festival in Grand Haven. The Coast Guard Festival Run, presented by North Ottawa Health System and the Tri-Cities Family YMCA, is the unofficial start to the community’s celebration of the United States Coast Guard. This annual race event truly has an event for everyone in the family: 5K Walk/Run, 10K Walk/Run, 1 Mile Family Fun Walk/Run, and a Tot-Trot obstacle course.

This was the third year I’ve run one of the Coast Guard Run events, but the first year I planned to race two. One of the unique features about the Coast Guard Run is that the 5K and 10K races are set up to allow for runners to be able to participate in both events…two for the price of one! Starting at the Tri-Cities Family YMCA, both courses offer a challenging mix of hills and scenic views of Lake Michigan and the channel; showcasing the local running scene. If you do both races, you get a double dose of hills. The Grand Haven Running Club showed up in full force at this annual event. Members joked that racing both events was required to retain ‘membership’ in their growing local running group. (Note: Nothing is required to be a GHRC member except a good attitude and a pair of running shoes!)

I had been tempted to race both the 5K and 10K when I joined the GHRC in December. After beginning marathon training back in May, I was hesitant to juggle my intense training schedule to accommodate races. This event also fell on the first of my longest training run weekends. I knew if I was going to do both events, I needed to have a strategy for both races and keep in mind that I would be running 16 miles the following morning. I didn’t want to be race-wrecked.

Leading up to my first double race attempt, I tweaked my training up to the event to allow for more hill preparation and light mileage the day before. I’d been doing my speed work on the roads in Grand Haven with GHRC members, so I did my mile repeats for the week on a route that took me out and back over the Grand Avenue hills, the series of hills that are featured in both courses. This gave me a good feel for going over the hills on tired legs. The night before the race, my boyfriend Steve and I ran five easy miles.

At this point, I had a plan in mind for my race strategy: I wouldn’t run all out for either race, but I would aim for times and paces that were fast and challenging for me. I would race the 5K at a 6:40/mile pace (my speed work pace), adjusting effort for the hills as needed, and picking it up on the last mile. Then, with about 30 minutes to recover and refuel, I would run the 10K as close to a 7:00/mile pace as I could. And honestly, I was hoping for an age group medal in at least one of the events. The field of this race is wide and unpredictable with so many tourists that come into town. When I got to the YMCA, I reminded myself of my plan and crossed my fingers my legs could hold on through the hills…twice.

The 5K was amazing. After the national anthem, 900 runners and myself took off through the charming neighborhoods on the west side of Grand Haven, many decorated in red, white, and blue. I often forget how much fun racing a shorter distance can be and mostly because I can really let loose with my speed. By the time I got to the first of the Grand Avenue hills, I was ready to conquer it. Before I knew it, I was rounding the corner by the Grand Haven State Park and the finish line was in view. One last hill to climb and my first race of the day was done. One more to go.

I joined about 330 runners at the 10K starting line after quickly refueling with watermelon slices and water. Again, I reminded myself of my goal paces. My legs felt tired now but not completely shot. I knew if I raced smart I had a great 10K left in my legs. The 10K route loops runners up into Harbor Island and back down by Washington Square before joining the 5K course for the remainder of the run. Up, over, and through the Grand Avenue hills a second time, past the state park, and returning to the YMCA finish line. Powering up the Y Drive hill at the finish is a test for any racer, and the second time harder than the first. But I had done it! I ran two back to back events in the same morning and had done it with a smile on my face. My marathon training had proven itself with my pacing and ability to race on tired legs. The icing on the cake was walking away with two age group medals, one for each race. 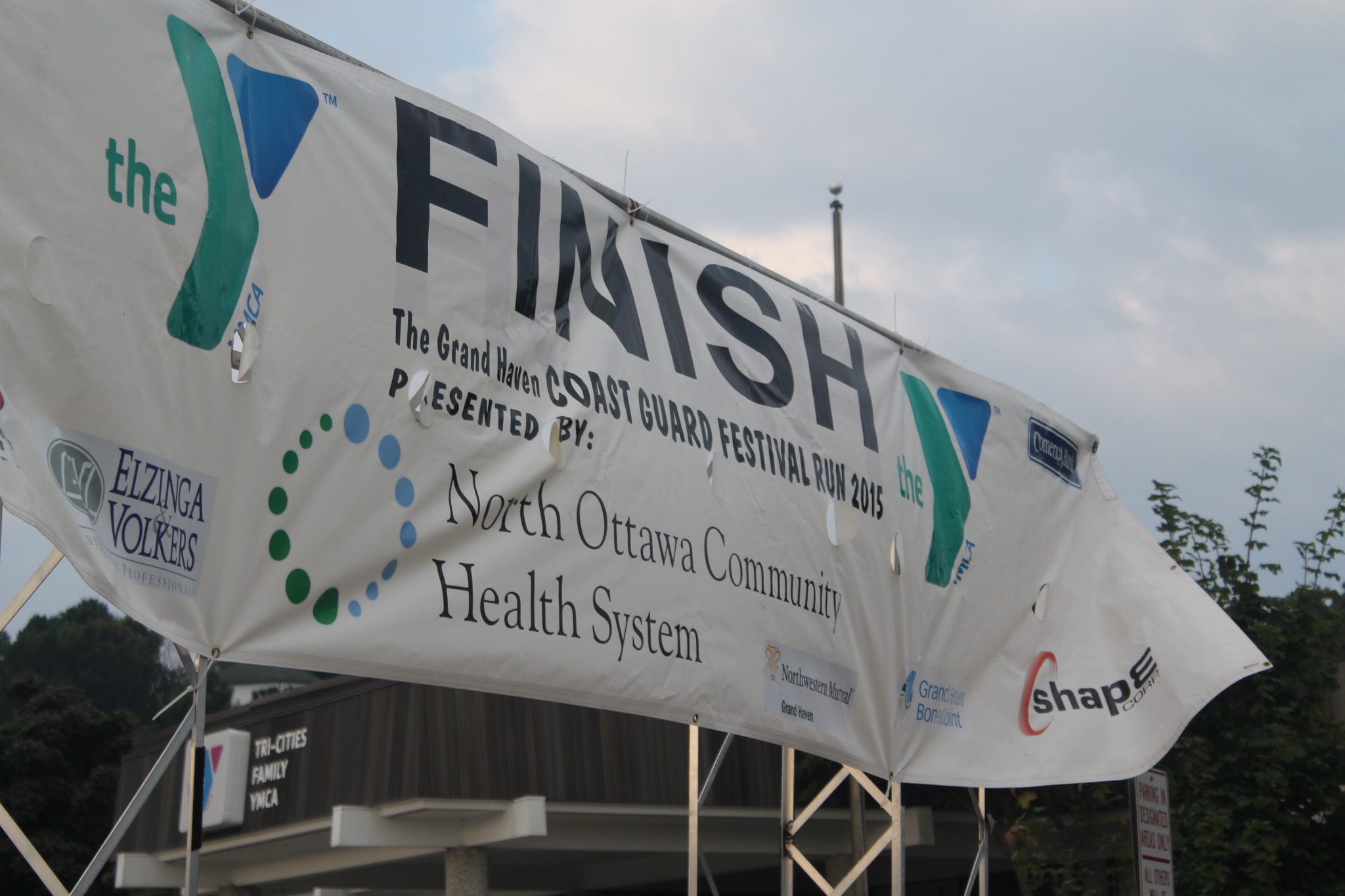 Post race, many runners sought breakfast at one of the many local restaurants within walking distance such as Morning Star or DeeLite. Others went home to shower up, then head to the beach. Families headed toward Washington Avenue to get seats for the Kids Parade, the first of the two Coast Guard Festival parades.

The Coast Guard Festival Run is the perfect start to any runcation in the Grand Haven/Spring Lake area. The festival continues into the next week. On Monday, the Coast Guard boats arrive and begin their ship tours. The carnival, picnics, tournaments, and other activities follow with the Grand Parade and fireworks capping off the fun on Saturday. With so much to do in Grand Haven and the surrounding areas, it makes the perfect Michigan getaway.

Places to See + Things to Do in Grand Haven

Odd Side Ales – The Grand Haven Running Club’s meeting spot for group runs. This local brewery as a fun vibe and is family friendly.
Vander Mill – A local cider mill and restaurant featuring ciders made with local apples.
The Pump House – Just off the channel downtown, this ice cream parlor has dozens of unique flavors and toppings, perfect for a post race celebration.
Grand Haven Musical Fountain – A free synchronized light and water show set to music, this is a summer staple in Grand Haven. Nightly shows begin at dusk all season long. You can catch one on a night run down the river channel.
Grand Haven Lighthouse & South Pierhead – A must see when in town! The lighthouse and pier are a beacon on Lake Michigan; right next to the state park and beautiful beaches.
North Ottawa Dunes Trails & Coast Guard Park – Perfect for getting onto local trails. Coast Guard Park serves as the trailhead to the North Ottawa Dunes Trails. These well-marked trails offer a variety of looped routes for novice to experienced trail runners.

Courtney Hansen is an avid runner, teacher, and mother. She has completed a 25K, 6 half marathons and countless 10Ks and 5Ks, placing in the top three in her age group in the majority of the races over the past few years. Courtney, currently training for her first marathon in September, aspires to qualify for the 2016 Boston Marathon. These goals are the driving focus of her current training regime. Courtney is a member of Run Muskegon, Grand Haven Running Club, the Oiselle Flock and a Nuun ambassador. She is the author of the running blog Running in the Mitten.