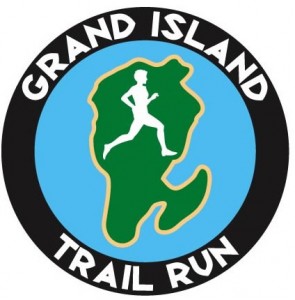 Number of runners: Capped at 500 total.
Ferry ride low-down: short and sweet, 10 minutes tops. Leave at the ferry dock just west of downtown Munising. Shuttle buses pick up runners from numerous area hotels, motels, the local high school and campgrounds in the morning, then provide return trip after the race. Ferry ride cost is included in race entry; additional tickets for family and friends are available for purchase.
Must-have gear: 20-ounces of hydration (can refill at aid stations), fuel (just don’t litter; eco-friendly Great Lakes Endurance is adamant about no trash left behind — runners will be disqualified for doing so — and there are no trash containers on the island), and plenty of bug spray.
Where to stay: Holiday Inn Express is the race hub — packet pickup happens here and it’s just a 1/2 mile from the ferry dock. It also overlooks Grand Island. (We ended up tent camping, which worked out great, at Wandering Wheels campground, about three miles outside of Munising. A bus picked up runners from this location, too, though Joe drove me to the ferry in the morning and picked me up post-race.)

These are among the words Jeff, race director of the Grand Island Trail Marathon and Half Marathon, shares with runners this past Saturday morning. Marathoners have taken off about an hour earlier, and those of us tackling the 13.1 distance are gathered at the start line, swatting at the unrelenting mosquitos while listening to Jeff’s final words of advice to ensure no one gets off course and everyone has a safe race – Watch for the small blue and orange flags on your right. Follow this signs for the half-marathon. Be aware at all times of your surroundings.

He asks for a show of hands from those who have run this race before, and a smattering of arms shoot upward. Then, “How many of you are running it for the first time?” The majority of hands are raised in response. This small, picturesque race, one that has been touted by Runner’s World and Running Times magazines, clearly is catching on among more runners, I think to myself. It’s my first time here as well, and even before I’ve begun running I know I’ll be back.

You are in for a treat, Jeff tells us as he briefly describes the gorgeous course we’re about to run. It’s a scenic loop that takes runners northeast up along Murray Bay and Duck Lake and then heads eastward into the tombolo (this is how it’s described on the race web site, and ‘tombolo,’ which I had to look up, means one or more sandbars or spits that connect an island to the mainland, according to Encyclopedia Brittanica).

What we also had to look forward to: at four miles in, runners head back westward on the Trout Bay Beach, then ascend inland to the heavily forested highlands of the island’s interior. When we would reach Echo Lake, we’d head toward the western coastal trail and rejoin the marathon course (22 mile mark of the marathon). The remainder of the course follows the west coast of the island on a gradual downhill back to William’s Landing and the finish. I’d heard about the downhill on this course – thank you, Erin and Pam, for your detailed description having biked the island a week prior to the race! The downhill portion sounded very nice – gradual and during the final miles.

I’d decided this race, like most every trail run or race I’ve ever participated in, would be something to savor and enjoy – no pace or time goals. Just run and soak up the sights. Though I’ve grown up in Michigan, and have made countless trips to the U.P. throughout my childhood and as an adult, I’d yet to explore Grand Island. After stepping foot on this island – the largest on Lake Superior’s south shore, encompassing over 13,500 acres of dense woodland, including several lakes — I wondered what took me so long to get here.

As the half marathon gets underway, it’s humid and wet – it’s been raining off and on since I’ve arrived on the island at 7 a.m., just as marathoners start their race. The sprinkles feel OK, though, since it’s not a cold rain. I’m hopeful it’ll help the bugs stay away some.

I remind myself to start slow and steady – something I think I’m finally getting the hang of after 7+ years of racing. The first few miles are on two-track trail, taking us by cottages to our left and the calm waters of Lake Superior to our right. I start to find my groove, and though I’m not locked into my Garmin, I glance down a couple of times to see my pace is about 8:45 – 9 minutes/mile on average. It feels good, and I’m reminded just how much I love running trail and how different it is from a road race.

I’d also heard about the beach portion of this course, and at mile 4, coming up to an aid station – you know you’re in the U.P. when aid station volunteers are wearing mosquito netting over their faces – we’re told to stay to the left. “To the beach!” the volunteers shout out, pointing toward the trail that takes us to the sand.

For a mile – a miles that feels very, very long – we trudge along the sand. It’s slow moving, and a line of us form. We’re not exactly on top of one another, but this section’s terrain definitely leads to several of us clumping together. I look outward, toward the expansive and beautiful and colorful cliffs that are Pictured Rocks in an attempt to distract my mind from my difficulty running on sand. Though the waves aren’t crashing, as they apparently were last year, my feet get a little wet as they search for the harder-packed, wet sand. I try to stick to the middle, between the soft sand and the water, and I think I do an OK job muddling through. But I am extremely excited to see the turn left leaving the beach. I want back on the trail.

Of course, back on the trail means a hill is just around the corner. It’s a decent-sized hill, one that winds some and is covered in tree roots and rocks. I’m taken back to another Great Lakes Endurance race, the 25K Tahqua Trail race I ran last summer, and I take it easy (don’t want a sprained ankle like last year!). I feel strong going up – I believe it’s in no small part because I’ve not gone out too fast – but it’s a tough climb. My legs and lungs are burning and I’m breathing hard as I crest the top. OK, shoulders down, power through your core, just keep going.

The downhill is glorious. Seriously, so, so good. It’s gradual and lovely and it gives you just what you need to catch your breathe and stay steady. This is the middle of the race now, and it’s always interesting to me to find that this point, no matter the distance, is when I am in a zone and also thinking about the finish. Our bodies and minds just adjust to whatever distance we’ve set out to run. Mile 8, 9 and 10 of a half marathon can feel just as significant and daunting as miles 18, 19, 20 of a marathon.

While this race definitely doesn’t feature lots of spectators, the people we do cross paths with – volunteers, hikers – are incredibly supportive. They clap and cheer as we pass, which is really cool. And as I head into the homestretch, feeling strong overall yet ready to dip my tired legs into icy-cold Lake Superior, seeing these spectators is uplifting. Around miles 10-11, when we’re sharing the final miles of the marathon route, I hear steps behind me. Someone coming up fast. Then, a voice. “Let’s go, Durocher.” It’s Eric, a fellow Traverse City runner, a talented athlete who is in the lead of the marathon. “Go, Eric, go!” I say to his back as he whizzes by. (He ends up winning the race, his third Grand Island Marathon victory.)

Eric’s words tumble around in my head, as does a text I received from Cassy earlier in the morning: “Have a great time up north! Hammer down!” Alright, let’s do this. Let’s finish strong.

I reach the mile 13 mile marker — we also were told the race course actually was 13.3 miles — and I know I’m close. A few more cheering spectators are at a bend where runners veer right and head toward the finish. I punch it in and run strong through, stopping briefly when a volunteer tells me she has my time and offers me a wooden finisher’s medal. (Each runner receives a print-out slip with their time and other stats like age group finishing place. It’s a nice touch.)

I see Eric and his wife Jessie not far from the finish and we say congrats to each other. I’m on a mission, though — to get to the water just a few more steps away. At the shore I sit and take off my shoes, socks and calf compression sleeves. Then I walk into the frigid water, which feels amazing on my legs that worked so hard for me. Bliss. I have finished in 1:59, a time I’m very pleased with. It’s 15 minutes slower from my road race PR for the half marathon, but I don’t care. I’m actually happy because I did push myself enough, and best of all, felt strong throughout. I’m eager to see Joe and our kids, who didn’t come onto the island (we’re kayaking Pictured Rocks later in the day and I wanted them to rest at the campground), so I grab a banana, some organic cherry juice and tasty and healthy chocolate treats offered, and get in line for the next ferry.

We made this a family camping weekend, as we’ve done in the past for other races. Though the weather was hit or miss after the race — thunder, lightning, downpour — Mother Nature cooperated and we ended up having a great time kayaking in the afternoon (after a delicious lunch of whitefish sandwiches at the family-friendly restaurant The Navigator in downtown Munising). A few pictures from our excursion, which we planned using the tour company Northern Waters Adventures. They were fantastic — very helpful and knowledgeable. 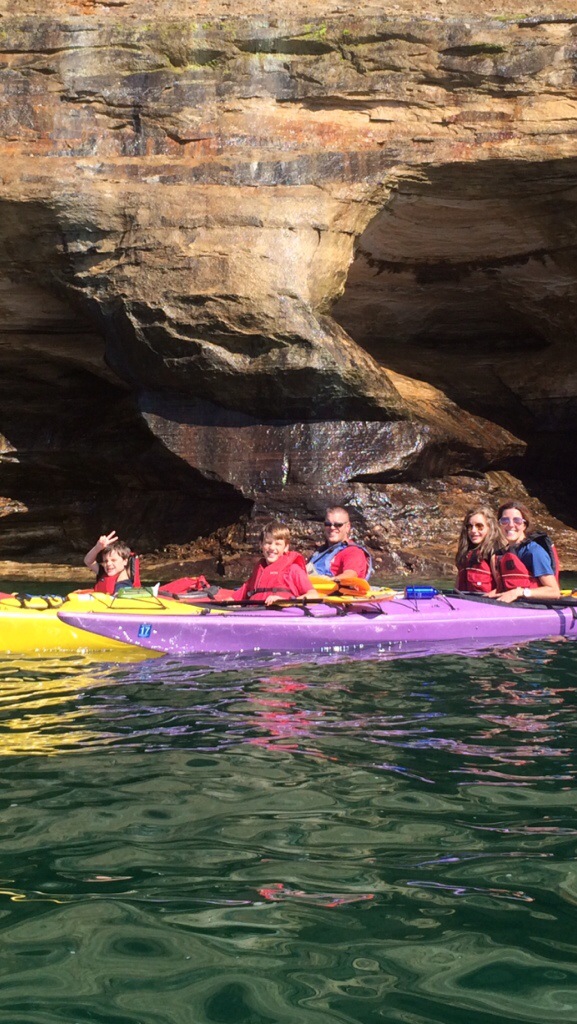 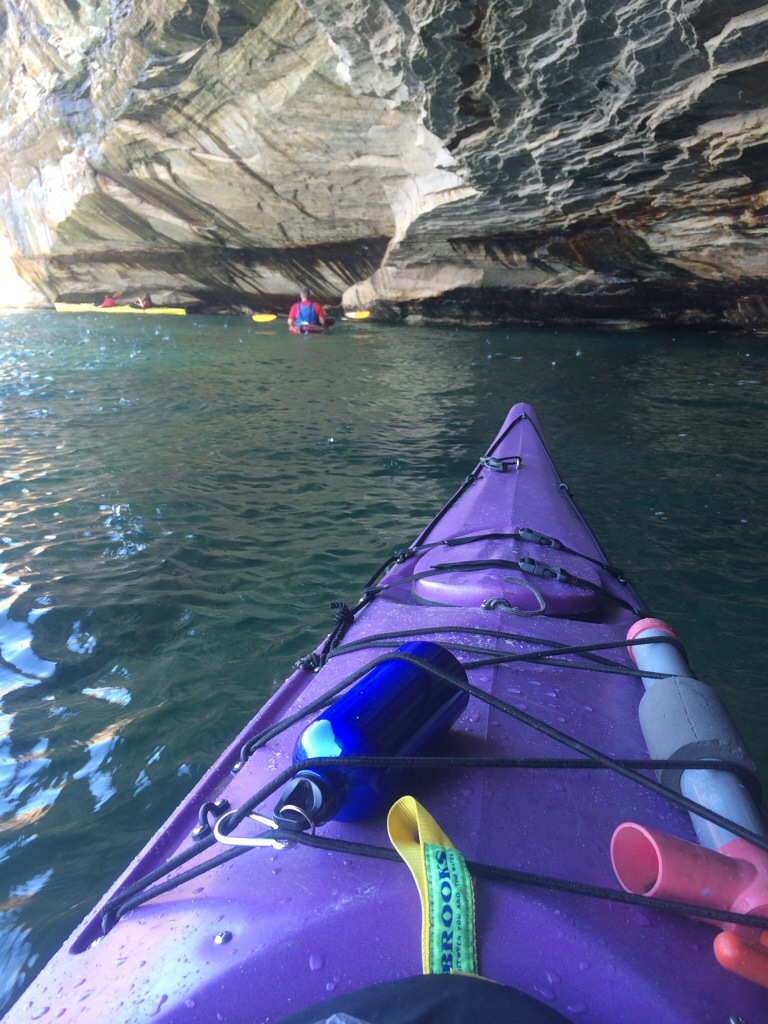 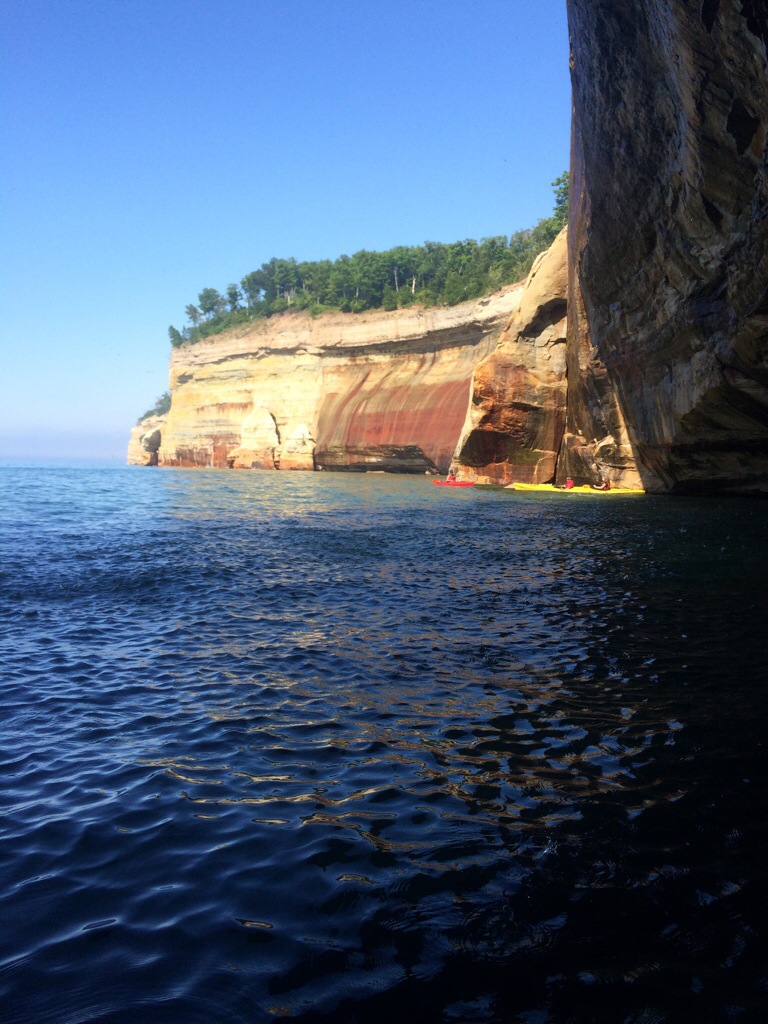 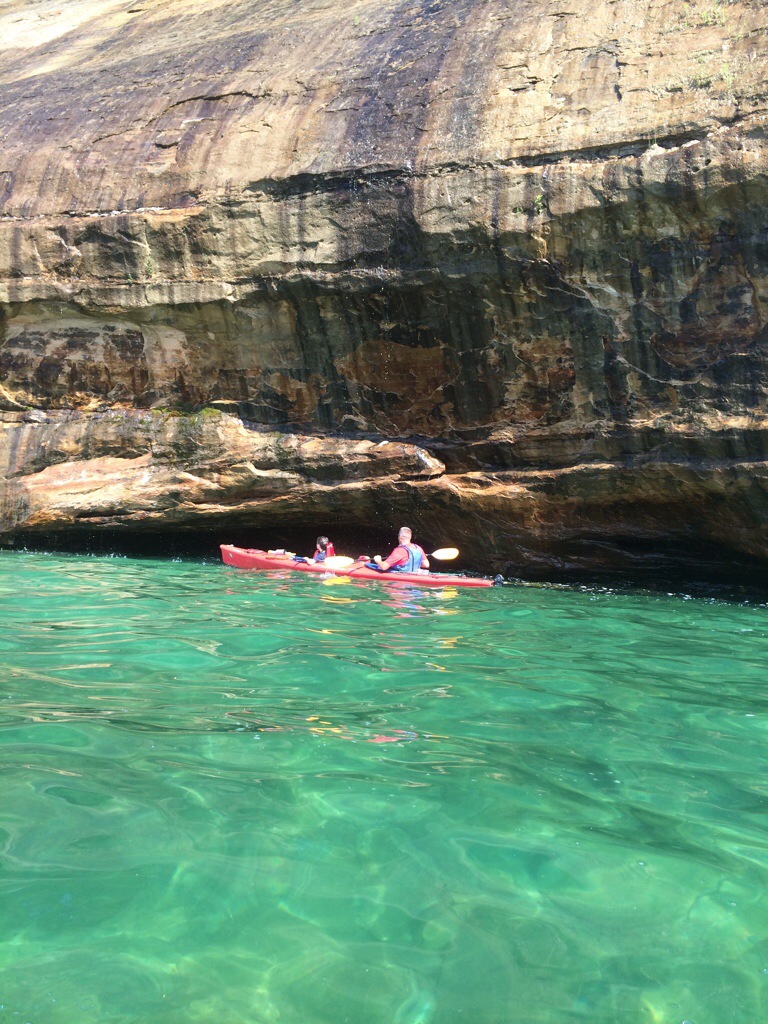 That night we enjoyed some of our favorite U.P. craft beer, Widowmaker from Keweenaw Brewing Company.

On our way home we had to make a stop at Castle Rock in St. Ignace. We hadn’t been there for several years, and it was fun to see how the kids have changed. 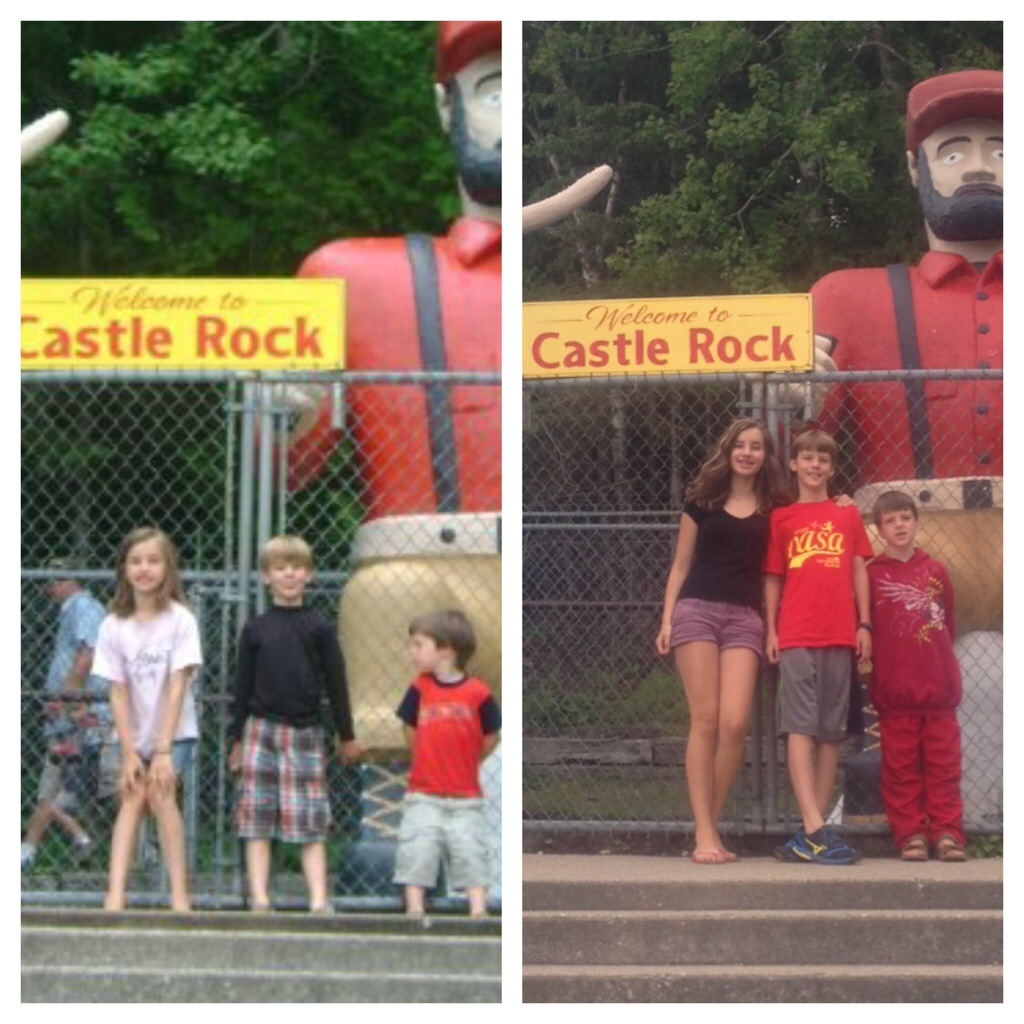 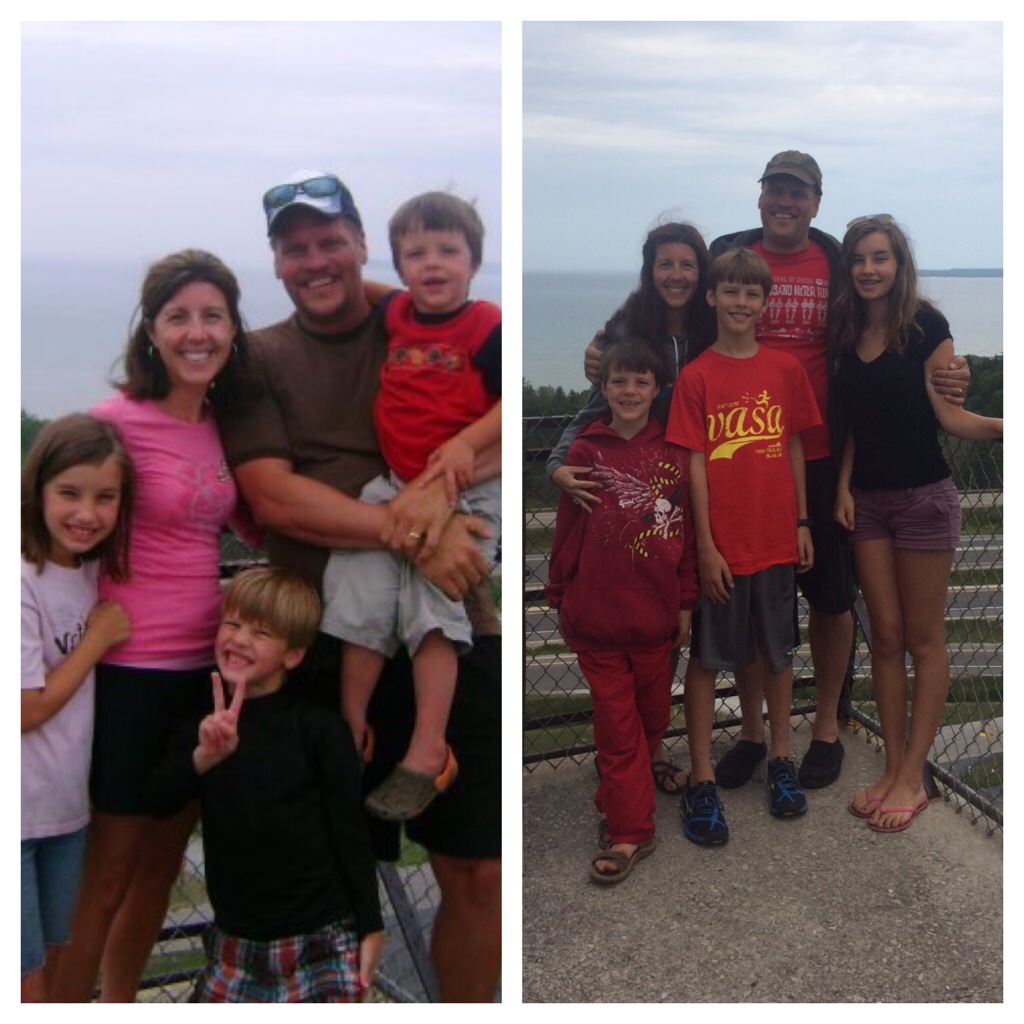 I hope to run this race again next year, this time with friends. I’m so thankful to have had the chance to be there this year.

Have you run or biked Grand Island?

What’s your favorite place to camp and play in the outdoors in the U.P.?