I can’t say that my main reason for signing on for the Eugene Women’s Half Marathon back in 2010 was to run a female-only race—it was more a cool aspect of an event that was far-flung and that took place in an area of the country that was completely foreign to me (furthest west I’d been at that point was Colorado during a college spring break trip). Mostly I wanted to travel with one of my BRFs and run 13.1 in a place widely known for its running roots. Another friend, Laura, an Oregon ultra-runner I’d yet to meet but who had become a blogging buddy, suggested signing on for the inaugural event. I was excited to experience, through running, an entirely different geographical landscape.

A little over a year later, I ran my second women’s race, the Nike Women’s Marathon in San Francisco with Beth and Katherine. This time, it was more intentional, this idea of running alongside thousands of strong mothers, daughters, and sisters–and to make a girlfriend weekend of it.

Both races did reveal to me just how special a female-only race can be. From the elaborate race expos and extras like chocolate handed out mid-race, to post-event special touches—spa services, Tiffany necklace “finisher medals”—these races cater to the female runner and aim to create an experience that goes well beyond your everyday road race.

According to  Running USA, there were more than 200 “women-only” events in the U.S. in 2011 meeting the criteria of 95% female participation or more. This same report by Running USA found that women-only events have surged in the last decade, meeting the growing demand of female runners. The camaraderie of other female runners along with feeling less self-conscious about pace were reasons cited in the report as why women flock to these events. Not to mention the array of activities including a health and fitness expo just for women and runner medals or gifts specific to the female participant.

In Michigan, these women-focused races are on the rise, too, with the Detroit Women’s Half Marathon and 5K on Sept. 22 being the latest offering.

I checked in with Michigan runner Mary Culbertson, co-race director, to learn more about this new fall race.

How did this event come about?

The idea for the race came about around 1 ½ years ago. I noticed a lot of women’s races popping up around the country. There’s a great community of women’s running in the Detroit area, and throughout Michigan, and I thought a women’s half would be a perfect fit here. I mentioned the idea to my friend Eva Solomon, who is the owner and founder of Epic Races, a company that provides professionally managed, safe, eco-friendly multi-sport and endurance events for beginner through elite athletes and which showcase the resources and beauty of southeastern Michigan. Epic Races already puts on a women’s triathlon (Tri Goddess Tri), so I thought she would have a great sense as to how Michigan runners might respond to a new women’s half marathon. We’ve been working together since and are looking forward to a great event in September.

What can runners expect from this race?

The course is on Belle Isle, a beautiful city park in Detroit that is also an island. It’s the largest island city park in the U.S., a little bigger than New York’s Central Park, and was designed in the late 1800s by Frederick Law Olmsted, who also designed Central Park.

The race will be a certified USATF Course and will be run entirely on Belle Isle, looping it twice and starting and finishing near the Scott Memorial Fountain. It will be a wonderful setting for a race, with the course passing the Belle Isle Conservatory and other historical landmarks and the island’s natural beauty.

We’ve heard from women that they’re interested not only in a great course but also the unique touches that make women’s running events special – and we’re planning plenty of them. The Douglas J Aveda Institute is setting up a spa room as part of the expo. They’ll be available to braid your hair so it’s in place and out of your eyes for race day and provide other fun services. Goody brand hair accessories will be handed out at the spa room, and GloProfessional will have skincare samples for you in the goody bags. There will be a Chocolate Mile sponsored by Sanders Chocolates, a finisher’s charm, and more to come!

How many people do you expect to participate in the event?

It’s our first year and we’re seeing a great response so far. Right now we expect around 2,000 runners.

I started running cross-country in middle school, and then joined the cross-country team again later in high school. After that I didn’t run again until I was in my 30s, to get back in shape after my daughter was born. When I realized that my then-60-year-old mom – who hadn’t started running herself until she was 50 – could outrun me, I decided I needed to set some goals! So I set my goals high. Before I could even run a mile I signed up to run the Nike San Francisco Women’s Half Marathon through Team In Training, an organization that raises money for leukemia and lymphoma through sports events. Thinking I wasn’t the only one who should tackle a challenge, I recruited friends and coworkers to run and raise funds as well. My mom ran 26.2 miles that year while I huffed and puffed through the half. Afterward, I found I enjoyed the camaraderie of a running group and since someone was always training for something, it was fun to join in. And I’ve kept running ever since. Now my daughter, who once said she would never run, is excited to start middle school cross-country in the fall.

Any great running advice to offer? 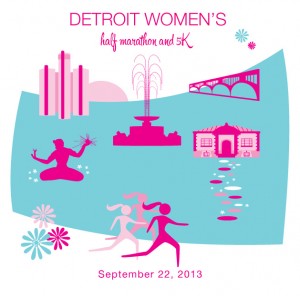 What more do runners need to know about the Detroit race?

Check our website at www.detroitwomenshalf.com for exciting news on the race and the charities the race will be supporting. You can also contact us about a charity you want to fundraise for and we can start a fundraising campaign for you.

The website also has information on local training groups that can help you get started and provide great incentives to keep going, such as Goalmakers in Metro Detroit, and Two Dogs Running and PR Fitness in the Ann Arbor area. If you’d rather train on your own, our training partner Applied Fitness Solutions (AFS) has online training plans available to help you train for either the half marathon or the 5K.

Start running with friends – make it a team effort! A race like this is a great place to start, because you’ll have a goal in mind, and have fun while you’re pursuing it. We encourage individuals as well as teams of all kinds to sign up – from corporate teams, to fundraising teams, to groups of friends who want to run together. Most of all, we’re excited to see everyone on September 22!

Sign on for this race through this weekend and save — rates go up from $70 to $75 the day after Mother’s Day.  Keep up on the latest with this race over on Facebook–“like” the race page here »