For many runners excited about a certain race on their calendar, training goes smoothly and when that day finally arrives, they are confident everything has been done to race at their best. Most runners know, however, that many variables are involved in having things work out as they should. Time commitment can become a problem with work and/or family responsibilities. Our bodies often aren’t able to handle the training we do and injuries sideline us for extended periods.

To maximize your chances for success, it is important to set up a manageable plan from day one that focuses on realistic expectations. Too many runners, in the excitement of that anticipated race, try to do too much too soon instead of focusing on what is achievable over a long period of time. The key to starting a training plan is to design one that is sustainable.

Before the new year, I knew that one race on the 2016 calendar would be more important than any other: the Cherry Fest 15K in early July. So, when I decided to set up a plan that would start the first week of January and get me through the six months of preparation, I knew to take a few things into consideration:

1.) I hadn’t run at all the past three months; opting for a combination of biking and hiking.

3.) At age 62, I knew my body’s limitations in terms of how much volume I could handle.

Plus, quite frankly, I wasn’t convinced I wanted to go through yet another training schedule that would have my body feel the daily aches and pains associated with long distance running after doing so for nearly 46 years. Why would I want to endure McKinley Hill one more time after already doing it over 20 times in the past 30 years?

All things considered, I set up a plan. Keep in mind that throughout my running life, January has been the month where I have trained the most. This is because I’ve wanted to start the new year with a well-established base of miles regardless of the wintery conditions. My log chart (started in March, 1977) reveals more 100 mile weeks in January than any month of the year.

I designed a plan that would start with a 10-minute walk, 10-minute jog and 10-minute walk, four times the first week. This was a far cry from the days when I would insist “if you don’t run at least 30 minutes, it doesn’t count as a run.” It was a small dose of running considering I would need up to 90 minutes to complete the 15K in July. But, it was both manageable and achievable.

It would be Feb. 25 before I would do my first 30 minute run — 10 days before my first “test race,” the Leapin’ Leprechaun 5K. It would be May 27 before my first 60-minute run. It was a plan that did not put much emphasis on pace, instead focusing on running the number of days per week I had set up for myself (beginning with four, ending with five) and averaging a set number of minutes per run (starting with 10, ending with 45). The long runs would slowly build up by 10 minute increments every two weeks, starting with 30 minutes in February and ending with 80 minutes in June.

By starting with a manageable amount of running and gradually increasing the volume, I was able to stick with the plan I had set up without getting injured or burned out doing more running than I felt I was mentally able to commit to. I added various races to the training schedule as a means of measuring my progress and as a way to remain focused on the short term. By the time of my focus race in July, I felt confident that I had prepared as best as I could. I would beat my goal of breaking 90 minutes and nearly matched my 82 minutes from the year before.

So, before you embark on a training plan to compete in that highly anticipated race, know your limitations. Far too many runners fall short of achieving their goals by doing too much too soon.  Set realistic goals for your training. Don’t assume that because you were able to do a level of training in high school or college that you can necessarily do it now. Be patient with your progress. A good foundation for any training plan is based on two factors:

1.) The number of days per week you can commit to training

2.) The amount of time each day you can commit to training

Once you’ve made the necessary assessment of your limits, you can set up a plan that is both achievable and sustainable. You can slowly progress from not worrying at all about the pace of your training runs to being mindful of your pacing as you approach your focus race day. The confidence you gain by meeting your weekly goals, regardless of how easy they may seem at first, will carry you through the weeks of preparation needed to be ready for the anticipated race.

Tips to help you succeed with training plan:

1.) Set the number of days per week you will run, taking into consideration family/work commitments. If it’s five, try to break the week up in half to allow for flexibility. Run Monday and Tuesday, then Wednesday is either off or a make-up day. Run Thursday, Friday and Saturday then Sunday is either off or a make-up day. Undecided between four or five days? Choose four. You can always add a day as your training progresses.

2.) Make the transition from miles to minutes run. From a time management perspective, you are better able to manage your day knowing exactly how long a run will take. It is much easier to base runs on minutes instead of miles. You’d be surprised how easy it is to convert. Then decide the number of minutes you wish to average each run. Undecided between 30 or 40 minutes? Choose 30. You can always build up to 40 as your training progresses.

There are many training plans out there. Choose one that fits the parameters you have set for yourself as opposed to conforming to plans that aren’t a good match. For example, with my focus race of 2016 behind me, I have settled into running four days per week averaging 30 minutes per run. It may not seem like much for the young, competitive runners, but it’s two hours of running per week that helps me maintain my level of fitness until the next focus race appears on the horizon. It’s a level of training that I can achieve each week and it is sustainable for a body that has been pounding the pavement for 46 years. 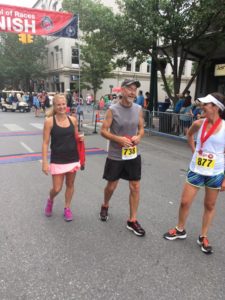 Ross Deye, pictured here at the finish of this summer’s 15K at the National Cherry Festival in Traverse City, is an Ohio Hall of Fame cross country coach, race director for the Vineyard to Bay 25K, Traverse City Track Club board member and creator of the PlanPeak training system. He can be reached at rossdeye@gmail.com.