This past weekend I got the chance to do the Boyne City Triathlon for the first time and boy, what a blast! This was my fourth triathlon of the season and once again I chose the Olympic distance, which is about a 1-mile swim, 25-mile bike and 6-mile run. I have actually never done a shorter, a.k.a. sprint, distance tri … short distances scare me!

This race took place on Sunday of Labor Day weekend. I was planning on driving up on Sunday morning (which meant getting up at 3:30 in the morning… fun!) but at the last minute the race director Rob Swartz (awesome guy, awesome story) was able to get me a place to stay with friends of his, two miles from the start line. Score!

So I packed up all my stuff (so much gear for a triathlon!) and left Traverse City for Boyne City. I got to packet pickup a little after 4 p.m. on Saturday and met Rob. He introduced me to Hunter Kemper (four-time time Olympic triathlete) and around 4:30 p.m. Hunter was leading a triathlon clinic in the transition area so I headed down there to listen. He spoke about his history in triathlon (very funny guy) and also gave some transition tips and course preview info. After the clinic, I decided I would drive the bike course since he mentioned a few “hills.” I thought it would be a good idea to know what I was facing in the morning. Typically I don’t even look at a map of the course (not advised!), but decided I would try something new! Glad I did. After I did the bike, I thought, why not check out the run course too? So I took a ride through town. Wow! Feeling so prepared.

I stopped off at the house to meet my hosts and wow, such a gorgeous place. Phoebe and Kurt were the nicest people. I decided that since I had such a lovely place to spend the night, I would pick up dinner and take it back to my room and eat overlooking Lake Charlevoix. And then get a good night’s sleep.

The next morning I got to sleep in. I got up at 6 a.m. Had my pre-race hot lemon water and bread with honey and then drove the two miles to transition. Probably could have ridden my bike, but did I mention “all the gear”???? The morning was overcast, calm winds and in the 60s … and the weather wasn’t calling for rain until much later in the day. Perfect. A rainy bike ride makes me nervous. I got to transition, got body marking (where race volunteers write your bib number on your arm) and my timing chip, and met up with friends from the Traverse City Track Club who were doing the race and the big crew from Tri Again Fitness. Transition was divided by distance and it looked like lots of sprint distance athletes and then a smaller field of Olympic distance and a few duathletes as well.

Transition closed at 7:45 a.m. and we headed down to the beach for the pre-race meeting. The water was 68 degrees, chilly for me, and thankfully wetsuit legal. Suddenly the wind picked up a bit and the sky looked ominous and much darker across the lake. Perfect! The race started at 8 a.m. with waves of athletes. Olympic men first, followed by Olympic women, then sprint men, sprint women. The swim course was a two-loop course for the Olympic distance, and one loop for the sprint.

Just as I got into the water, lovely rain drops started to fall, but thankfully thunder and lightning did not follow. The rain was brief and we were off. I got out very slow and stayed toward the back to avoid the craziness at the start. Then I got into my groove. The buoys were easy to see (even for me… ha!) and I felt like I was swimming pretty straight. Just as I was turning the second buoy, though, I could feel that the sprint men had just started and I was about to get ”roughed up a little.” So I just let them do their thing, then got back into my groove. I felt like my second loop was much smoother, since there were less folks in the water at that point. Though I did start to notice that the water was getting a little choppy at this point, so I was getting a little tired. But I kept saying to myself my new mantra when things get tough on the course: “You GET to do this…  remember last summer!” 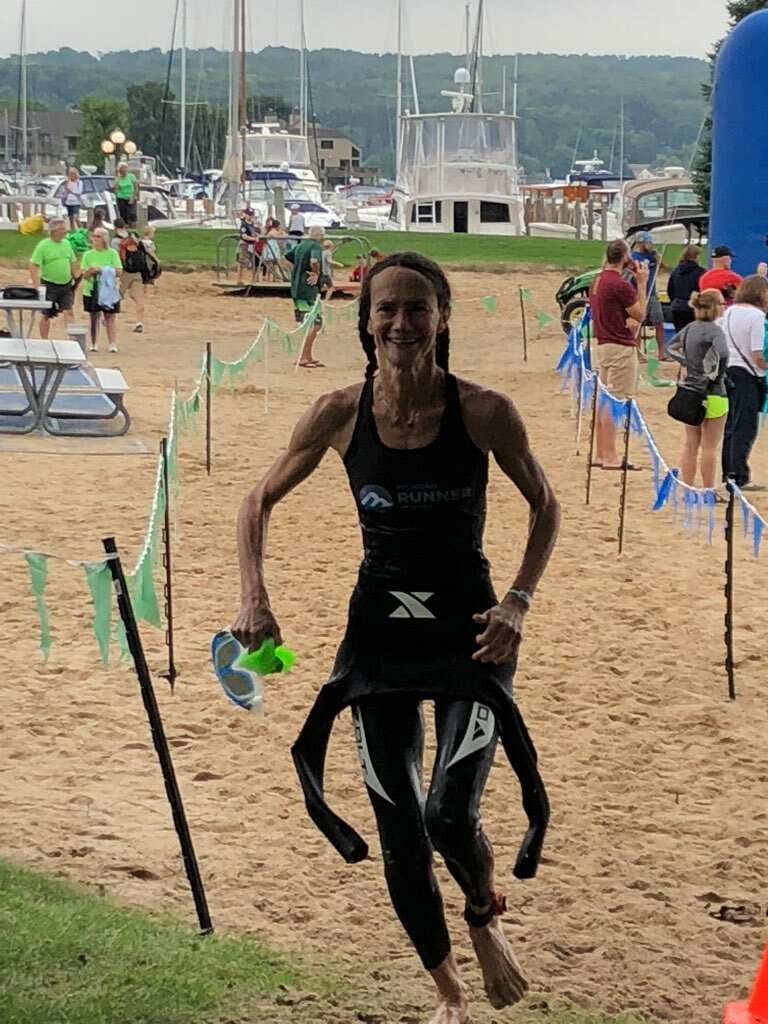 Then it was out of the water and a quick run to transition. Felt like it wasn’t my fastest swim but not my slowest (I don’t wear a watch in the water so I have no idea until I get on the bike.) Got my wetsuit off pretty quickly, hopped into my bike shorts, got my fuel, helmet, sunglasses and then put on my running shoes. No, I do not clip in and I ride a 15-year-old road bike that works just fine for me thank you! I am not the fastest cyclist, but I am getting better. Walked my bike out of transition and then got to the MOUNT line and who do I see but Phoebe and Kurt, my lovely hosts! And I am off. The bike course is beautiful!!! The Olympic and sprint course both follow Lakeshore Drive for about 6 miles and then the sprint turns back and the Olympic heads for the hills! I had the preview of these hills, but of course that was in a car, slightly different pedaling them, but again… “I get to do this!” The hills were mostly big rollers with the exception of one BIG climber, but the scenery, farms, fields, friendly volunteers, made it so much nicer. And the out and back was so fun because I could see all my friends doing the sprint heading in while I was heading out!

Heading into transition after the bike … there were Kurt and Phoebe again at the bike line… “Go Ali!” they yelled again! My bike ride felt really strong (for me… *see previous note about no clips and 15-year-old road bike… ha!) But my transition time from bike to run is spot on, since I am already in the running shoes. I can just take off my helmet (important!) and hit the road running.

Now THIS is what I know how to do! Running is my thing, so I can make up for my slower bike time here. The run course is a pleasant run through town (again two loops for the Olympic), so I take the first loop at a good pace but not all out. I am passing quite a few folks at this point and am feeling pretty strong. Sometimes my legs are a little wobbly after 25 miles on the bike, but today they are feeling good. I hit the second loop and now I go all out. I look at my watch and my pace is blazing (for me!). Did I mention at this point the sun is out and humidity is around 150% but no worries, the volunteers are there with plenty of water, for pouring on my head and in my mouth. And again, “I get to do this!!!” The last mile to the finish is downhill (thank you!) so I really let it rip! I cross the finish line, hear my name and there is Hunter Kemper again, this time with a medal for around my neck, but even better an ice cold towel for the back of my neck …  heaven! 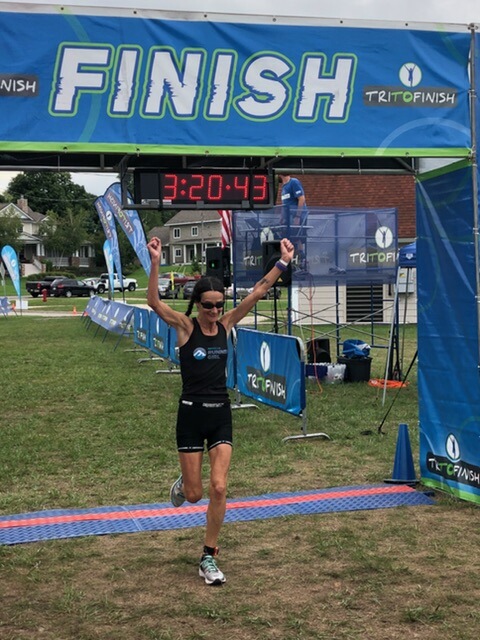 I see my friends at the finish and we chat about our races. Everyone had a great race and loved the course. Instead of traditional post-race banana and bagel, there are food trucks on site and you get food tickets to pick your choice of post-race fuel. Grilled cheese, tacos, burgers, your choice. My tummy is always a little sensitive after 30-something miles, so I went for the chocolate strawberry protein smoothie.

Next came the awards, and lots of TC folks got some bling (Yay, Tri Again Fitness peeps!), including me! I got second in my age group and was two minutes away from a PR!

I can’t say enough good stuff about this race. The race director Rob really puts his heart into this race, and it shows. I love the fact that the race entry fees are for his charity Team Lucky Seven. There were more than 300 athletes registered this year, good job! The course is beautiful and just challenging enough to make it even more fun! I also think this would be a great first triathlon if you are intrigued by the idea. The sprint distance for sure is definitely a great way to start. Thank you, Heather and Rob, for giving me the chance to race this. See ya next year!