Lisa Maginity watched her son Clifton compete in his first triathlon, at age 12, while on her stand-up paddle board in Lake Charlevoix.

“I was assigned to help spot and guide the swimmers during the swim portion of the Olympic and sprint distances on my SUP,” Lisa recalls of volunteering at the inaugural Boyne City Triathlon in 2013. “It is easy for swimmers to get off course, especially if the visibility is poor, and to be available if a swimmer gets in trouble. It was comforting for me, too, knowing that my son was in the water swimming in his first open water swim and I could keep an eye on him. I am so impressed by the speed and ease that people can swim even in wavy conditions!”

In the following years, Lisa would volunteer at the annual Labor Day weekend triathlon as well as participate herself, in the duathlon event.

“The duathlon is a fun but challenging aspect of competing,” says Lisa, a longtime runner and avid cyclist, both on trails and road. “I have not yet mastered the swimming portion of the triathlon so I saw it as a fun way to be a part of such a fun event in our very own community … I thought it would be fun to compete alongside of my son, even though I knew he would whip the pants off me. A 5K is a piece of cake, but to run a hard 5K and then transition to a fast 12-mile bike and then try to crank out another decent 5K is quite a challenge.” 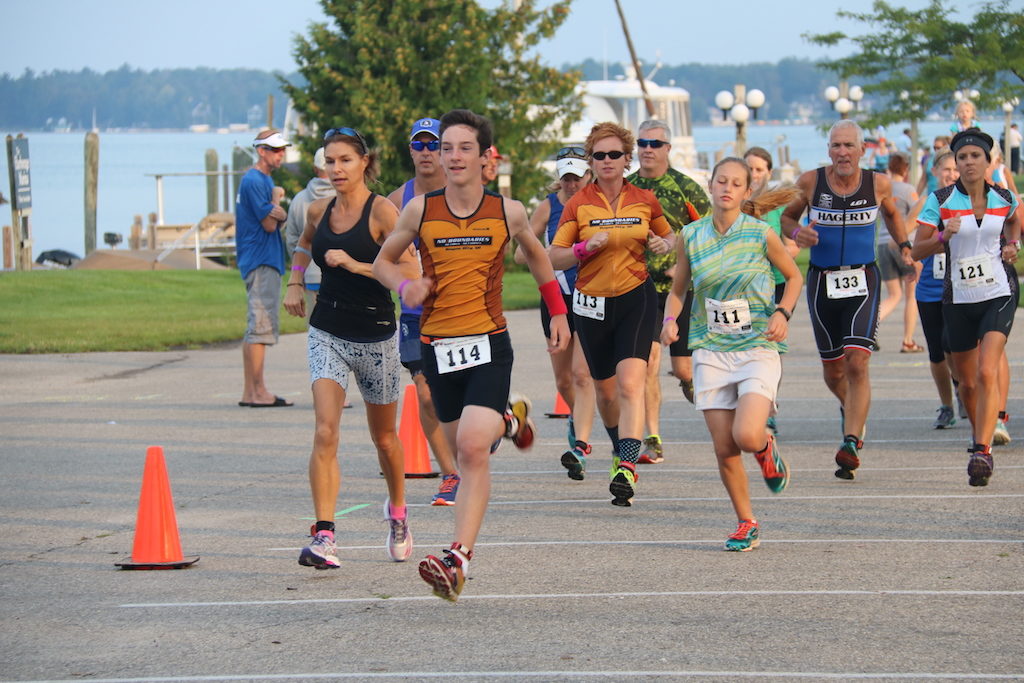 Lisa plans to be at this year’s event, again as a participant and this time joined by her younger children.

“This year I will be competing in a team for the duathlon with my son Will, who is 13, and my daughter Ava, who is 10. They look forward to carrying me in the running portion while I pedal my heart out in the bike portion. You see many families and friends competing together and it just brings a smile to your heart. Memories that will last a lifetime!” 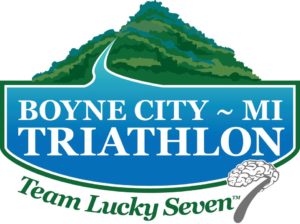 The Boyne City Triathlon, set for Sunday, Sept. 4, takes place in the village of Boyne City on the shores of Lake Charlevoix. MRG is partnering with race organizers this year — expect a podcast in the next couple of weeks featuring a conversation with race founder, organizer and triathlete Rob Swartz, who shares an incredible story of living with a rare neurological disorder — and recently caught up with Lisa to learn more about this northern Michigan event. Here’s more of what she had to say about the Boyne City Triathlon, which features Olympic and sprint distance triathlons, sprint duathlon, and relays, and raises funds for the research of neurological diseases.

How would you describe the overall race atmosphere and experience?

I have been impressed at the overall feel of this event. It is run like a true Ironman race! Rob hasn’t missed dotting an I or crossing a T. Everything down to the athlete identification, to the marking of the competitors, to accessing and marking equipment in the transition area is done extremely professionally. Any athlete would be impressed by the care and concern for their equipment and the security of the event. … And the bike course is stunning with its views of Lake Charlevoix!

Tell us about your son, Clifton, and how he’s discovered a love of triathlon…

He competed last year in the duathlon – having competed in one two years before in Charlevoix, and loved it. He was 14 at the time. It was the perfect race for him this particular year coming right during the thick of his cross country training. He hadn’t had as much time during the summer to invest in his swim training and thought it would be a better fit. He ended up finishing second overall with a time of 1:26:30. Not bad for a young man! Cliff started competing in 2013, the inaugural year for the Boyne City Triathlon, in the sprint distance triathlon. He has two local mentors that have inspired him: Ben McMurray, who has competed in two full Ironman Championships in Kona, Hawaii, both times finishing sub 10 [hours], and Dave Smith, who is a very accomplished Ironman competitor. Seeing their amazing accomplishments inspired him to start swimming competitively and to tackle the triathlon at the age of 12. His first sprint distance he finished with a time of 1:40 and he bettered his time the next year, despite a much more challenging swim due to the conditions, with a time of 1:37 – both years finishing second in his age bracket. He was off to a good start!

You volunteered at the Boyne City Triathlon a couple of years before registering for the event yourself.

I volunteered for this event in 2013 and 2014 — it is a wonderfully supported local event. Lots of local athletes and non-athletes alike take the time out of their busy Labor Day weekend to come out and support this fantastic event with an even better cause. Rob, the race organizer, is wonderful to work with and is very gracious to his volunteers by sharing some of the race swag with the volunteers and making sure that they are well fed at the cool food truck offerings after the festivities are over.

The post-race party has evolved to this incredible gathering in beautiful Peninsula Park after the blood, sweat and tears are over. The past two years, Rob has had several local food trucks come with their delicious local cuisine and the athletes and volunteers are given tickets to use as they would like so they can choose the meal of their choice. A brilliant idea! And the view from the park of beautiful Lake Charlevoix cannot be beat!

Tell us about Boyne City — what all can athletes and their families and friends do during race weekend?

The park is a short walk from the heart of downtown Boyne City so athletes and their families could venture downtown to take in the many fantastic art galleries, local shops and the many other establishments and eateries. We have recently had two tap rooms open in town – Boyne City Tap Room out of Charlevoix Brewing and Seven Monks Tap Room – Boyne City. After all that competition, a cold brew always tastes good! And of course our famous Red Mesa Grill, with their frosty Margaritas and steaming Fajitas, and Santé, with their chic, European cuisine and beautiful view, would top off any day in Boyne City. So many reasons to sign up and come to the Boyne City Triathlon! You would not be disappointed!

Ready to sign up? Register here » Use the code MRGTL716 to save 10% off the registration fee only (If you need to buy a USAT license, this is not included in the discount.) Funds raised from this event support Team Lucky Seven, Inc. and its mission of ‘Racing to Fight Brain Disease.’ In the first three years $14,000 was granted to the Mayo Clinic in Rochester, MN, for the express purpose of neurological research. Funds have been directed to research in MS, Alzheimer’s and ALS. Learn more and register here »

Race sponsor Boyne Mountain Resort is once again offering discounted room rates for all or part of the Labor Day race weekend. Use promo code BCTRI2016 when you make your reservation at boyne.com