Eddie Kline started his early fall marathon and half marathon racing event in west Michigan with a few goals in mind:

Make it like the Boston Marathon with a bus ride out and run back to town.

Give runners a final opportunity to snag a Boston qualifying (BQ) time in west Michigan.

Support local businesses and nonprofits in his community.

Also, he adds, “I wanted my friends in Holland to have a hometown race where all of their friends and family could come out and enjoy the lakeshore together.” 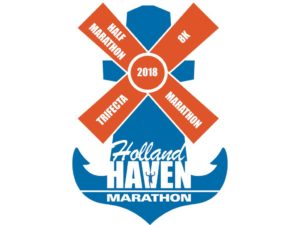 By all accounts, Eddie has done all of the above. Now entering its fifth year, the Holland Haven Marathon and Half Marathon (and 8K, added last year) takes place each September – the weekend prior to Boston Marathon registration opening – and features point-to-point race courses. (The marathon starts in Grand Haven and ends in Holland while the half marathon starts at the event’s charity partner, Camp Geneva, midway through the marathon course.)

What Eddie, his wife Jen, and their team of race volunteers didn’t necessarily expect: just how much the race would grow – registrations were up more than 50 percent last year. “We had runners from 25 states and four different nations,” he says. About 600 runners participated in one of the three distances, and 1,000 people attended the post-race party and expo, which includes free beer, cider, food, and vendors.

Eddie joins me on the latest episode of the Michigan Runner Girl podcast to give us all the details of this fall’s Holland Haven Marathon, Half Marathon and 8K, which is set for Sunday, Sept. 9. {To listen to our conversation, click on the player at the top of this post}

We talk all about this race, including the opportunity to earn a “trifecta” medal and how the race gives back to the nonprofit Medals4Mettle. Eddie also shares news of his newest race directing endeavor – he decided this spring to hold a new race called the Backward Mile.

“Instead of being so serious about running a race, I want to create a fun, carefree environment. I want to make fun of myself, and have runners make fun of themselves, too. The event will be somewhat of a spoof about running. We will do everything we can think of backward in reverse order,” he says.

The Backward Mile, which will also include collecting medals from runners to donate to Medals4Mettle, is set for Tuesday, April 24 at Big E’s Sports Grill in Holland.

Special discount codes for both races:

Use the code RUN12MRG to save 12% off your Backward Mile registration. This code also will get you $12 (yep, 12 dollars) off your Holland Haven Marathon, Half Marathon or 8K race entry.

The Michigan Runner Girl Show is made possible in part by the Grand Traverse Resort & Spa.