Michigan runner Jamie Clayton, a mom of three who is behind the blog Thrifty Veggie Mama, began running a little over three years ago, starting with a couch-to-5K program with her husband. “My second child was a few months old and I was looking for a quick way to lose some of the baby weight,” she says. “On Facebook, I saw that a friend of mine had taken up running and was training for a half marathon. That sounded like something I could do.” After following the couch-to-5K program, and buying a treadmill, they ran their first 5K in April 2010, about three months after beginning to run. “We ran our first half marathon in October of the same year and I was hooked,” Jamie says. “Since then running has become a part of me, a way for me to still my mind and keep my sanity. We had a bit of a surprise when, a couple days after that half marathon, I discovered I was pregnant with baby #3. (Hubby beat me by 8 minutes, I was pregnant—that’s my excuse and I’m sticking to it!) I took a bit of a break from running while I was pregnant, then ran the Grand Rapids Half Marathon in fall of 2012.”

Last weekend, Jamie ran her third half, the Brooksie Way in Rochester Hills. “The Brooksie was my first half and I loved it, so I was excited to run it again and improve my time. I trained very hard over the spring and summer! My goal was a sub 2-hour finish, 4 minutes faster than my PR.” Read on for her race recap.

The Brooksie is a growing race—this was the sixth running of the race and it was the largest yet with 6,200 runners and walkers, almost double from 2010. The event also has a 5K and 10K that run through the beautiful Oakland University campus.

Hubby and I went up to the expo on Friday evening, parked and picked up my packet quickly with zero issues. The expo was large with a good number of vendors including restaurants, local physical therapy clinics, running stores, etc. We browsed for a bit, looking at the cool new running gear, building our Christmas lists.

Saturday I hydrated as much as I could (I don’t drink enough water!) and was mindful of what I ate—avoiding too much ‘junk’. Lunch was spaghetti and veggie meatballs with garlic bread and some steamed veggies. Good carb loading! I kept dinner light and even avoided the pizza and chocolate fountain that night at a birthday party. 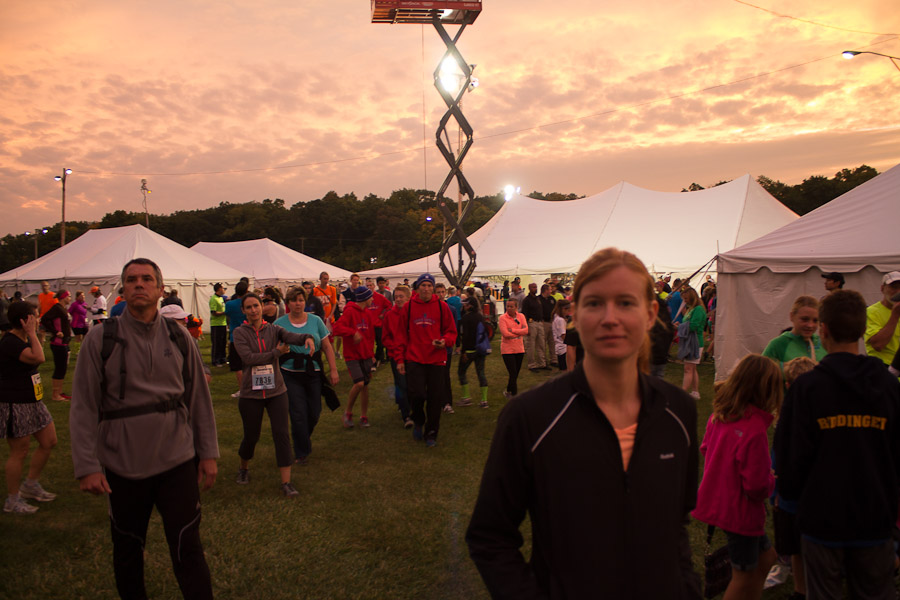 The race started at 8 a.m., and runners were advised to get there early due to road closures. I was up at 5:45 a.m. to have my pre-run breakfast of toast and PB with a couple glasses of water. We left at 6:30 a.m. and arrived at Oakland University a little after 7. We had no problem finding a close parking spot, near Porta Potties—arriving early was a good idea. Soon after we arrived, I ate a banana and made a quick bathroom stop. There were plenty of them available and I didn’t have to wait in line. Contrary to the forecast, there was no rain and I could even see a bit of the sun peeking over the horizon, giving us a beautiful sunrise. The temperature was in the 60s—perfect running weather.

Due to increased popularity, the Brooksie had a new corral start this year. I was in corral B. I made my way to that area about 15 minutes before the start. Volunteers were checking bibs at the entrance, ushering people to the correct corral. Grouped in with the other B-er’s, I anxiously waited. The National Anthem was sung. I said a final prayer to God, and we were moving…nerves gone.

This year they also had pace teams and I saw the 2:00 pace team and was determined to keep them in my sights. They really helped me not go out too fast (adrenalin) and force myself to keep a slower pace at the beginning.

There were lots of water stops (about every mile) and lots of entertainment. I stayed fueled with raisins at mile 4, fruit snacks at mile 7, and half a Larabar at mile 10.

A unique feature of the Brooksie are the trails. The trails are beautiful this time of the year and we even saw three deer. However, the running does get a little tight. Still, I kept my pace up. I was staying comfortably with the pace team and at around mile 7 I was ahead of them, feeling great. Then came the hills. The hills start at mile 7.5 and they keep on coming until about mile 11.It was at mile 9-10 that I started to falter. The pace team passed me. I took a couple walk breaks and started to question why in the world I was doing this. I was sure that I was no longer going to reach my goal so I should just quit and walk. I shut off those negative thoughts, put one foot in front of the other and caught up with the pace team again. I hung with them until mile 12 and then was able to turn it up and finish strong. The pacer gave me excellent encouragement telling me I had it and they would see me at the finish. By this point I knew I was going to make my goal and it felt fantastic!

I caught sight of the finish line lined on both sides with cheering spectators, saw my family in the crowd rooting for me and crossed the finish line in 1:58:14. Sub 2!! 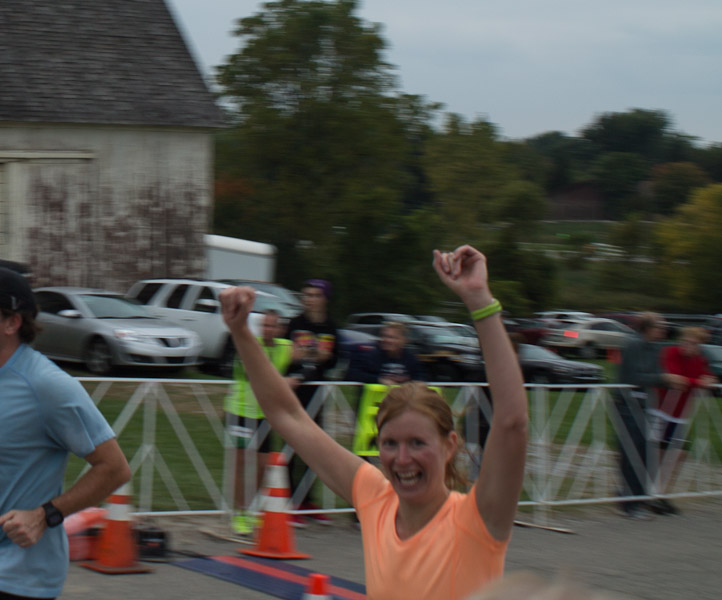 After crossing the finish line and getting my medal, my only thoughts were finding my family so I kinda skipped past all of the food in the chute area which was a mistake! I did get some water and a banana. Once I saw my greatest support team I embraced them and cried. The flood of emotion, from the sacrifices to the elation of accomplishing a goal and pure exhaustion, hit me at once and I cried in my Hubby’s arms (I think he may have misted up too). I love running! 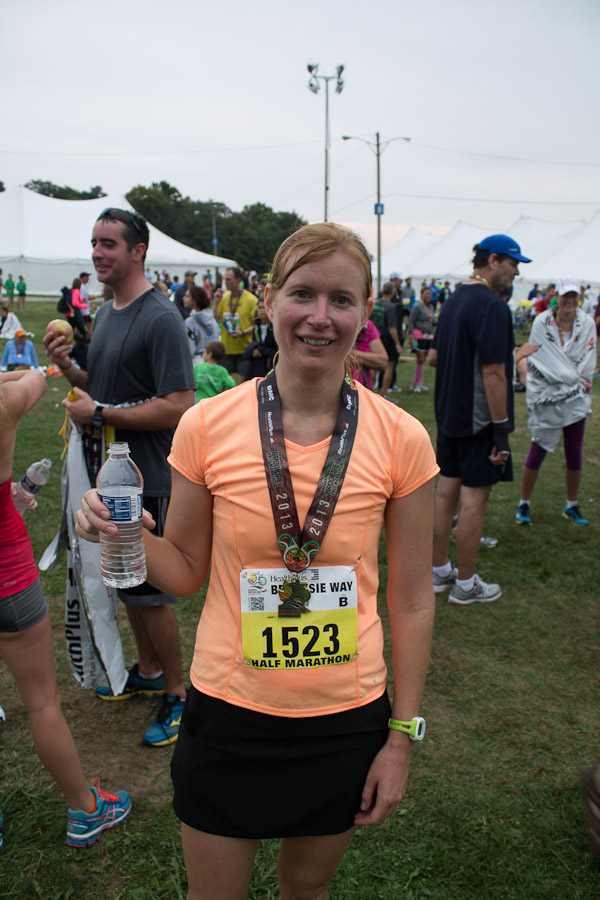 There was actually quite a bit in the post race area including inflatables for the kids to play on and hospitality areas with fresh fruit, granola bars, bagels, etc. Unfortunately the kids didn’t get to play a lot because it started to rain about 30 minutes after I finished. We ducked into one of many hospitality tents to escape the rain. We drank coffee and water and had some food while I filled them all in on my adventure. L, my oldest, cannot wait to run her first race.

All in all it was a great race experience and I am already looking forward to returning next year.

Read more about Jamie and how she and her family live and eat healthy at Thrifty Veggie Mama.