Last summer was a summer of traveling throughout Michigan for our family of five. We wanted to check out state parks near and far, and as some of you will recall, running played a big role in these camping trips — sometimes it was a race that brought us to a particular state park, but other times I knew only that I wanted to discover a nearby path or trail during our stay. There’s something special about exploring an area by foot — you truly learn about a community in ways you can’t by simply driving your car to get around.

This summer we made the trek north just once, for a camping/running weekend centered around the Grand Island Trail Half Marathon in Munising, and this singular trip was quite different from last summer’s multiple drives over the Mackinac Bridge as well as weekends south and east of us. But we wanted to take this summer to check out spots closer to home. Day trips to Lake Michigan. Afternoons on new-to-us bike trails. It’s been very nice. It’s good to play tourist in your own backyard.

This is how we ended up over on the Betsie Valley Trail in Beulah a couple of weekends ago. It marked our second consecutive Sunday in this particular region, which is about an hour’s drive from our house. We’re kinda in love with Benzie County and the Lake Michigan shoreline over that way.

Friends had told us about the Betsie Valley Trail, that the 9-mile stretch one-way between the lake village of Beulah and the beach town of Frankfort was especially beautiful. We decided it would make a great day of biking for our family, and with sun and mid- to high-70s in the forecast, we headed out late morning to drive to our start at the trailhead in Beulah. There’s plenty of parking at the trailhead, which is located downtown steps from Crystal Lake. A visitor’s center offer information about the trail and the surrounding area.

A bit more about the Betise Valley Trail:

We didn’t carry much with us — water bottles for all of us, of course, and I had a small backpack with snacks, money for lunch in Frankfort and a towel for our planned jump in Lake Michigan at the end — and we all had mountain bikes since we knew the initial few miles would be on hard-packed gravel. (As it happened, parts of the route along Crystal Lake were pretty sandy; we were very happy to have larger bike tires at these times.)

The views of Crystal Lake are simply stunning along the trail. Cottages and homes along this stretch are quaint and lovely; the trail runs parallel to the shoreline, dissecting the private beaches and their adjacent homes. We passed quite a few homeowners lounging on their docks and sitting in chairs on the sand, though it seemed a fair number of cottages weren’t occupied and maybe are used only as weekend getaways and second homes.

Our favorite stretch: Railroad Point Natural Area, which is pristine and quiet and takes you right along Crystal Lake. 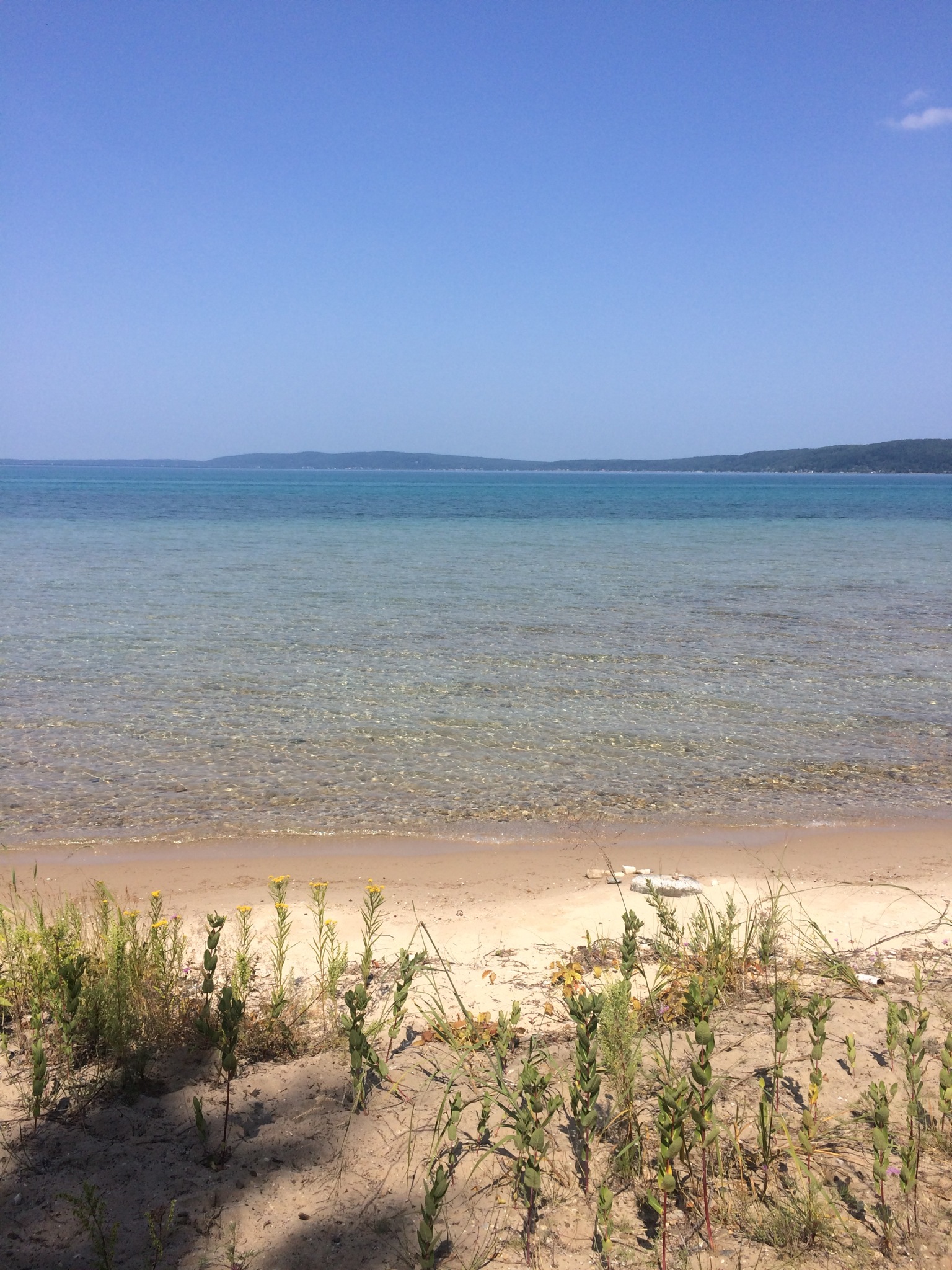 We continued on, drying off in the sun, and soon enough we reached the paved section of the trail. 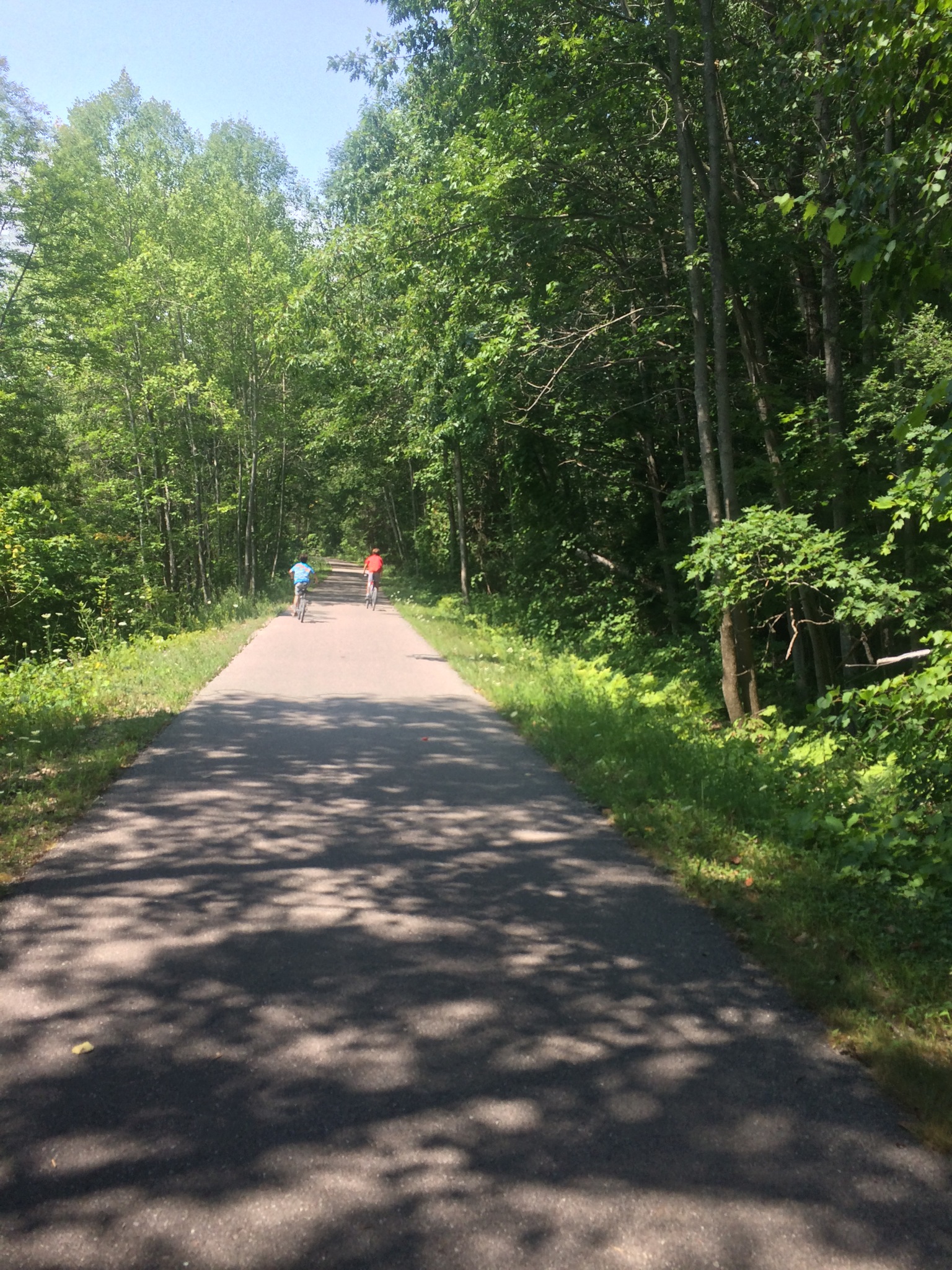 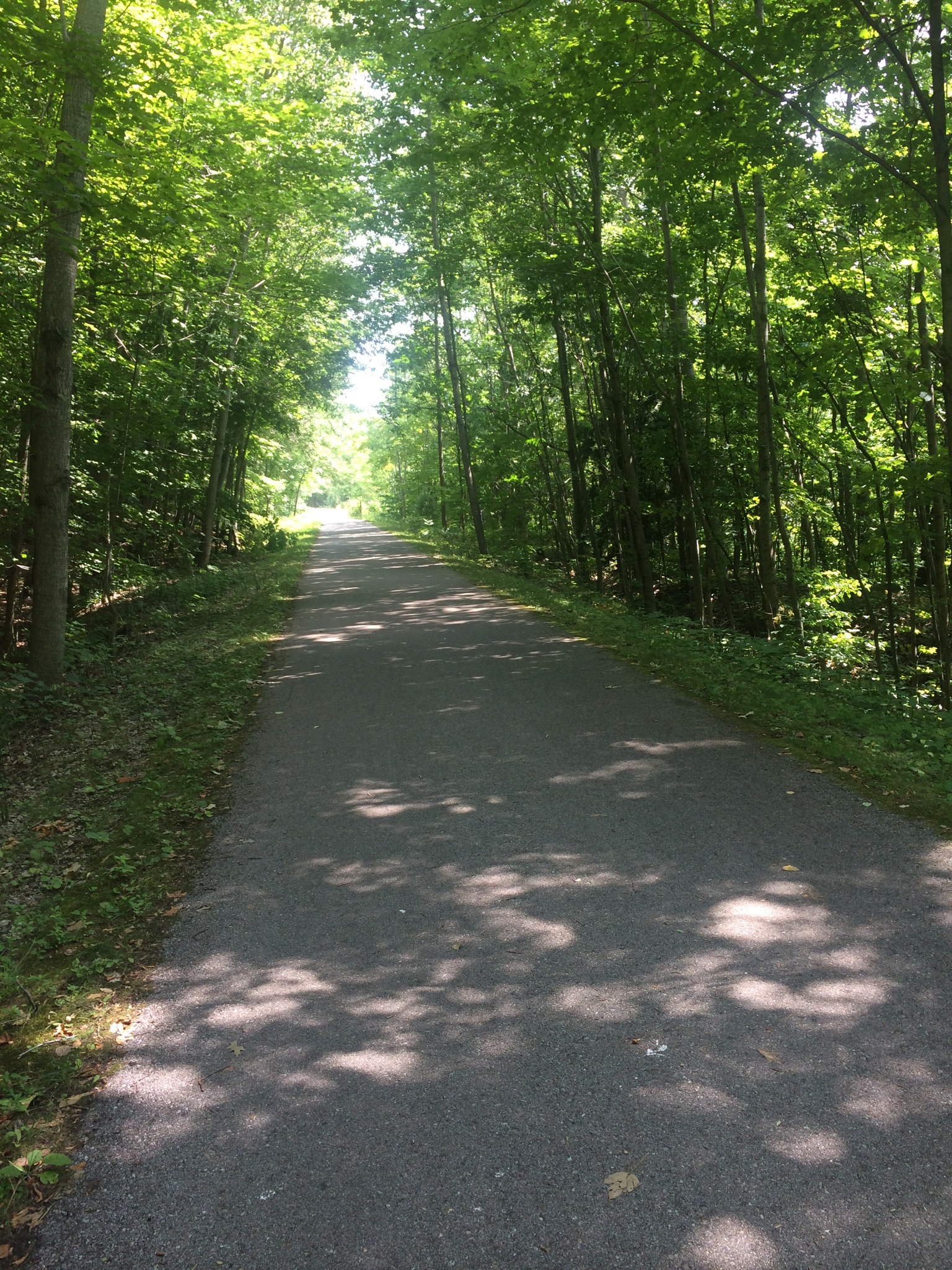 We stopped for a snack break just before reaching Elberta. We all agreed we were looking forward to lunch in Frankfort. We decided to stop at Stormcloud Brewing Company, a spot we’d tried for the first time the weekend prior. Flatbread pizza and cold ones were calling to us…

After lunch, we rode down to the Frankfort beach and Frankfort North Light, where we snapped a few more photos. 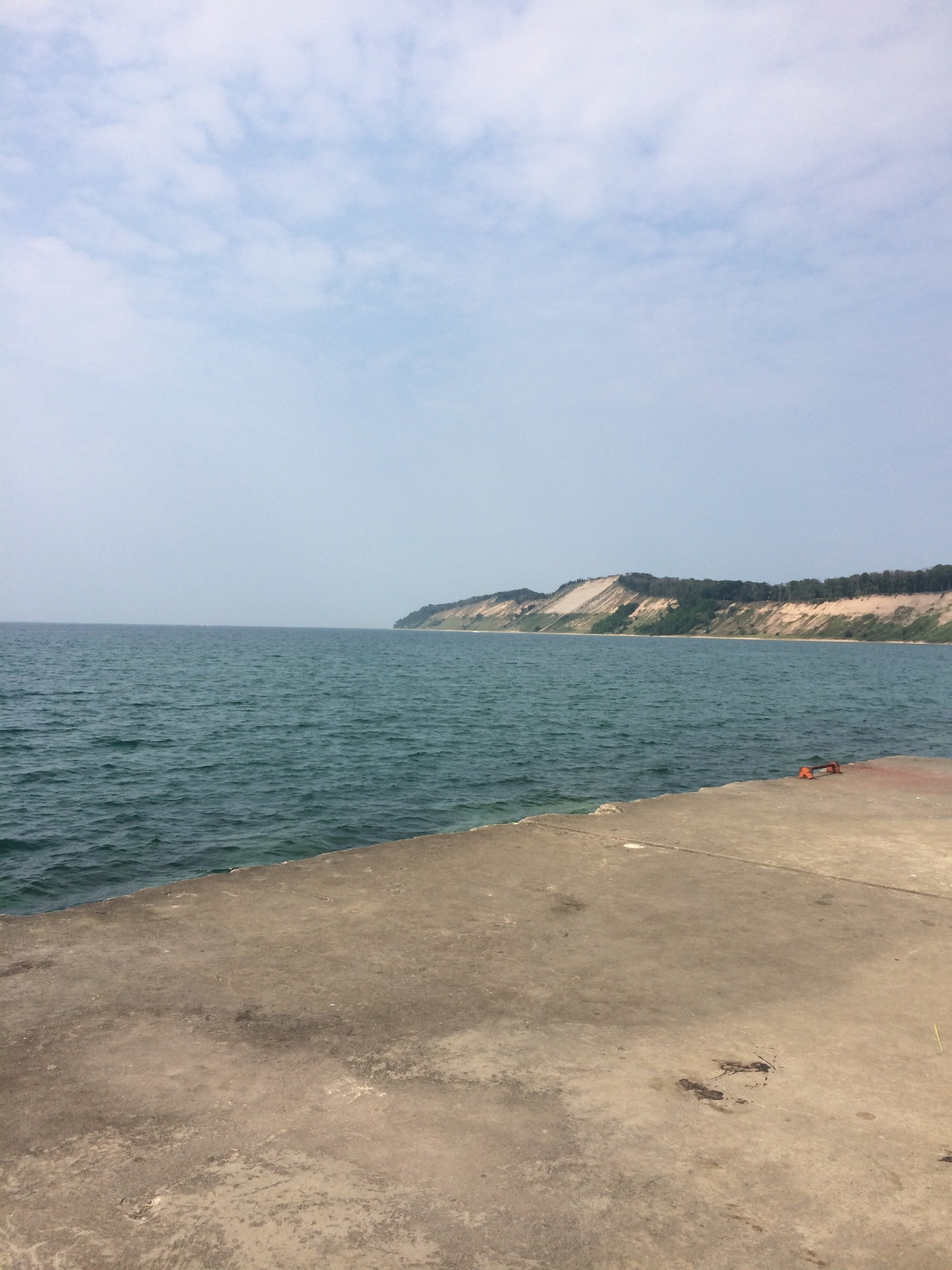 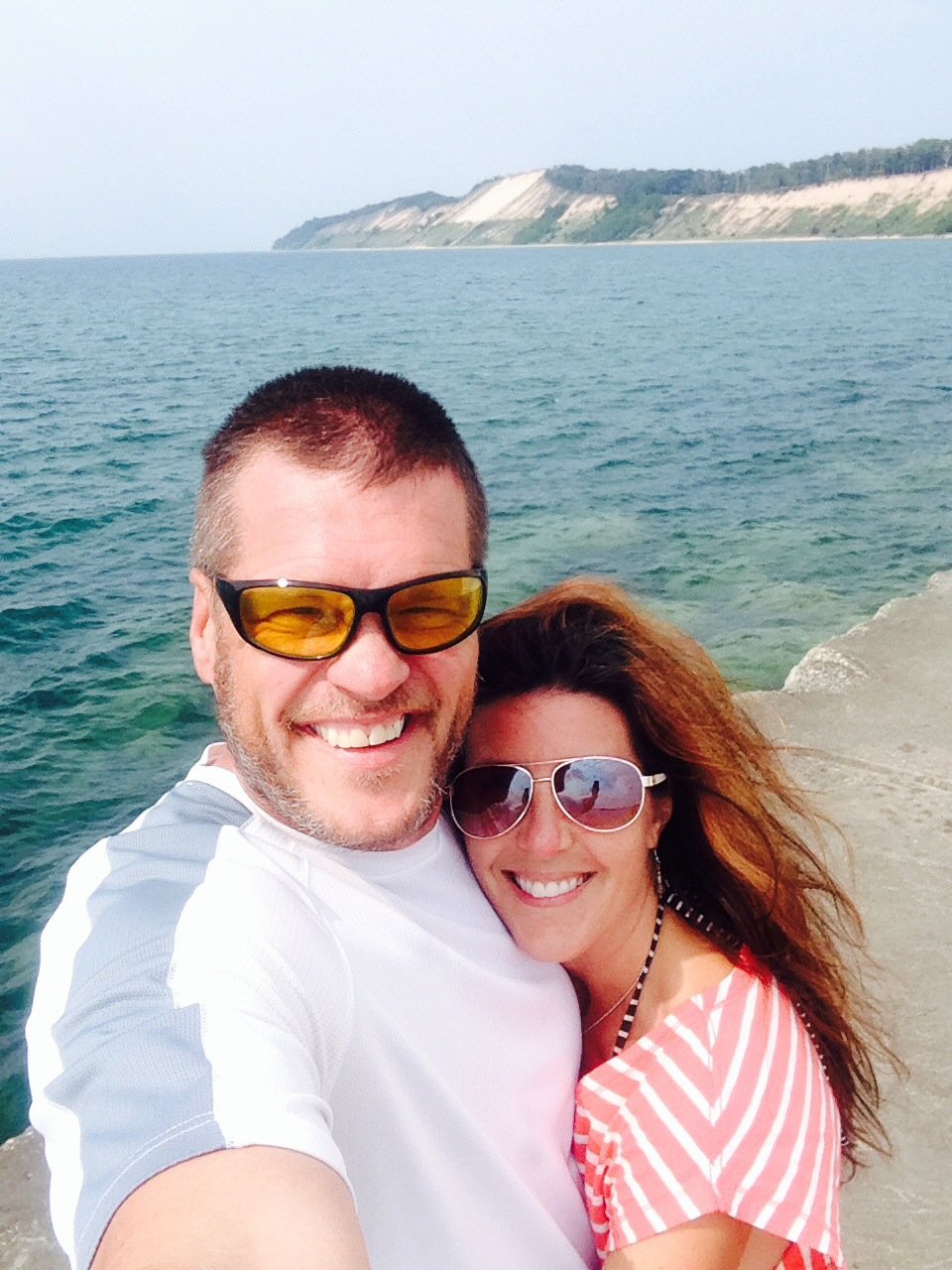 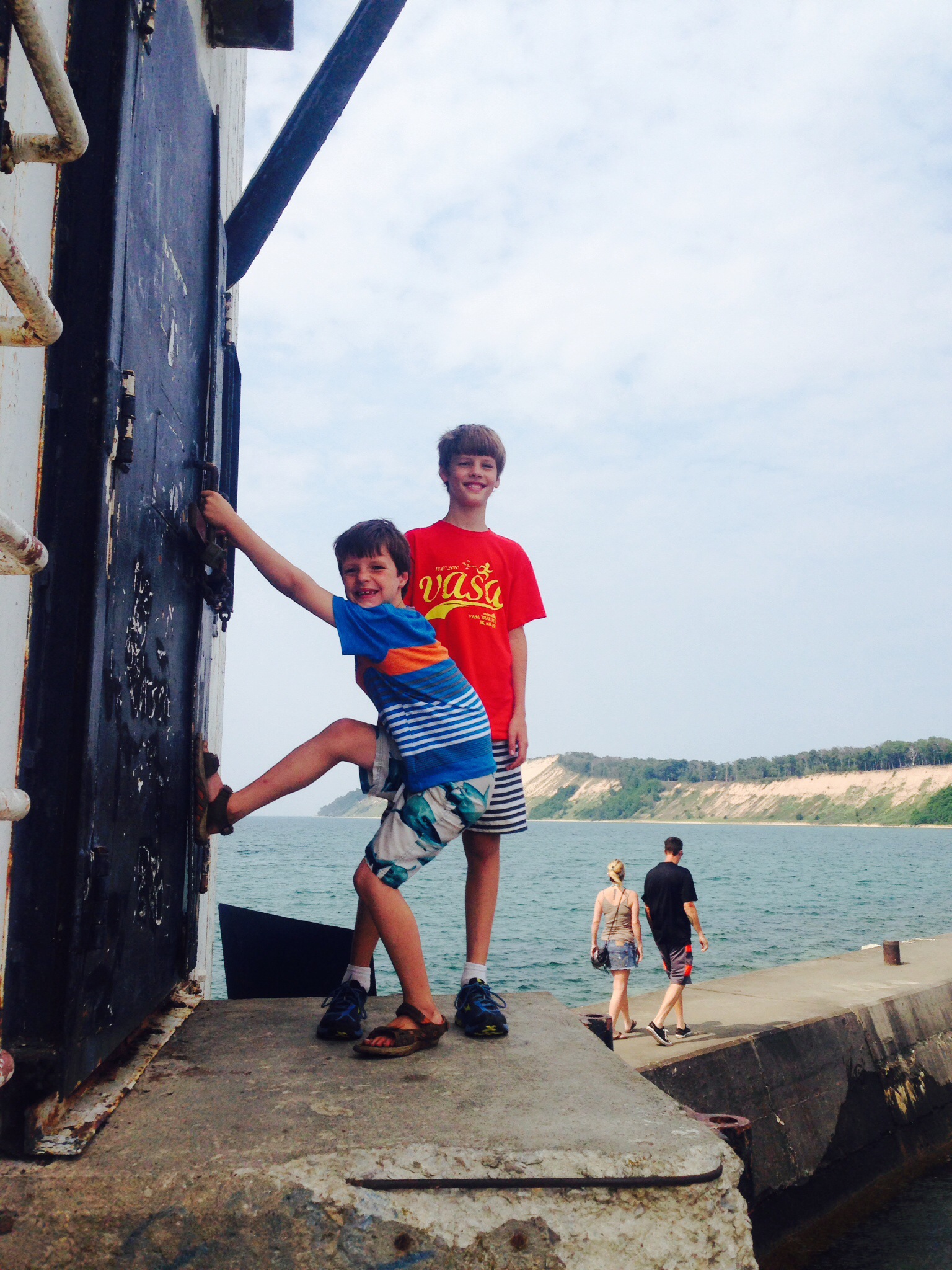 The Frankfort beach was pretty crowded, even late in the day, and we knew we had nine miles of riding ahead of us. So we got back on our bikes after the boys took a quick dip in the big lake and started the trek back to the trailhead. Admittedly 18 miles round-trip proved to be a bit on the long side (maybe it was the pizza and specialty popcorn and couple of craft beers we had at lunch?), but our boys were troupers and we did stop a few times to soak up the scenery again. Joe took this photo of me on the trail along Crystal Lake, with just a few miles to go. 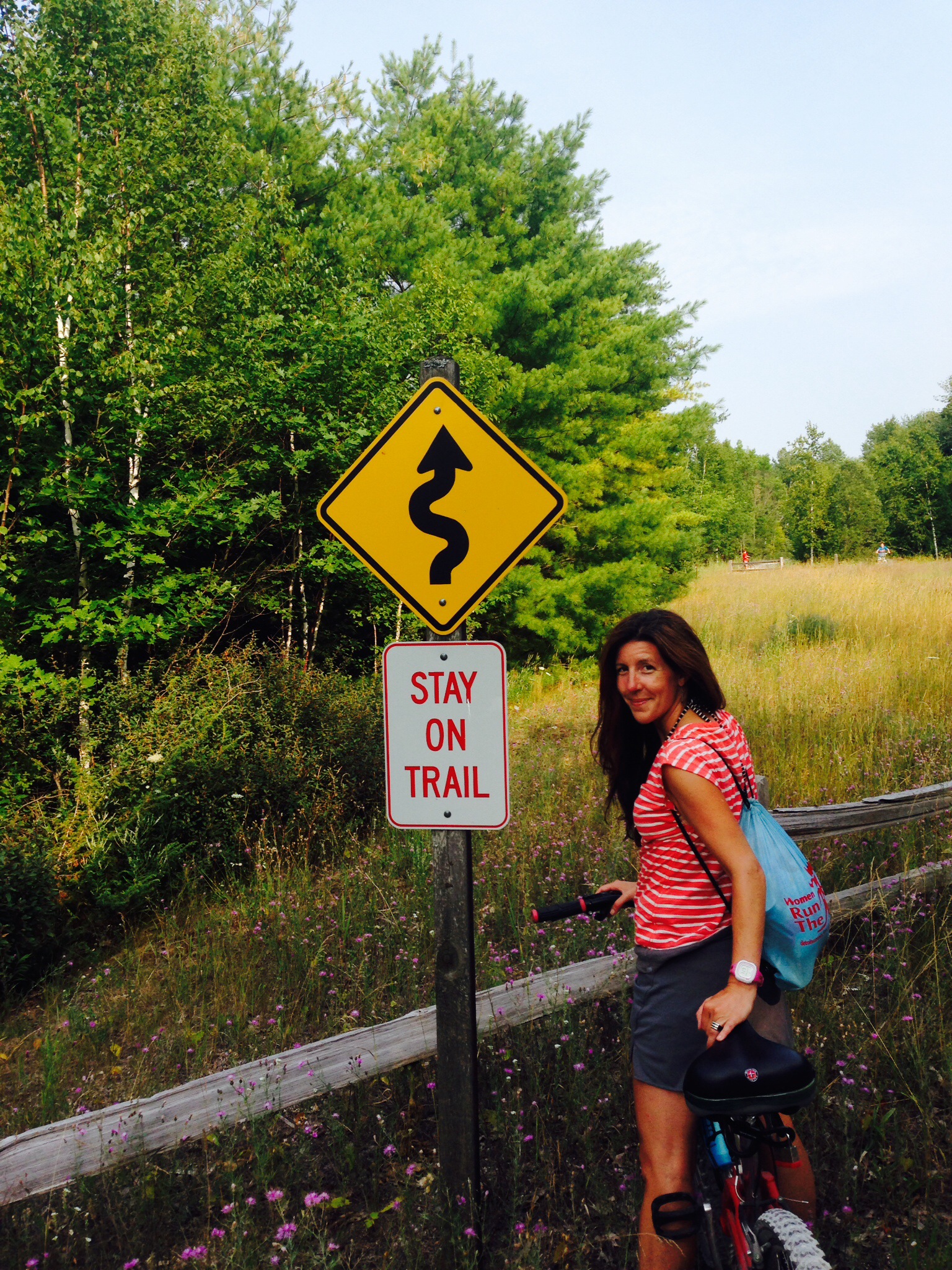 I’m looking forward to running this trail sometime this fall. We did cross paths with a few runners and other cyclists, though I was surprised we didn’t see more people out and about. It felt like we’d found a hidden gem of a place.

—
Have you run the Betsie Valley Trail? What’s your favorite section?