If you haven’t tried delicata squash, you need to. It’s one of my favorite things about Fall. What I like most about them is that they’re pretty easy to work with. Cut off both ends, scoop out the seeds, slice them up, and let the oven do the rest. I also like that you can eat the whole thing, skin and all. Or maybe it is that they taste like candy!

You don’t even really need to add anything to them except olive oil, salt and pepper—they are so sweet and tasty. And with the skin being edible, this squash is convenient to prepare. Technically the skin on a lot of squash is edible, but it is not too tasty. The skin on delicate squash is perfect—it gets tender and is easily eaten. 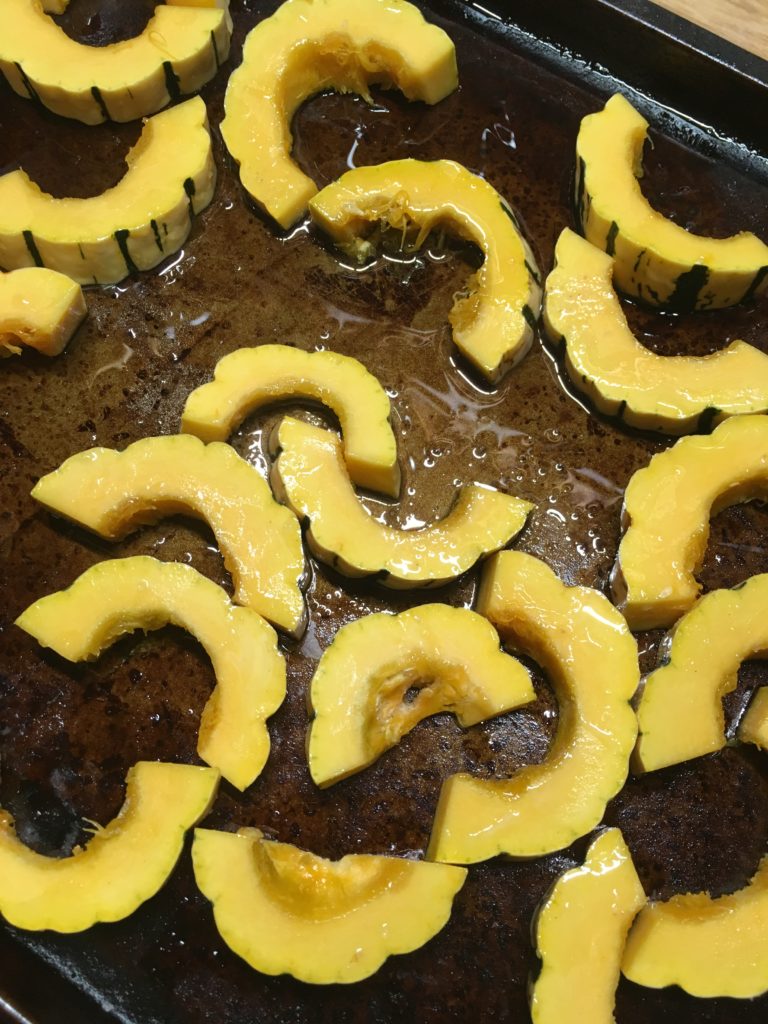 Some other ideas besides slicing and roasting? You also can stuff the cooked squash halves with a combination of anything from grains to greens to veggies.

Since delicata squash are thinner-skinned than other winter squashes, they don’t keep quite as long. Even so, they will keep for several weeks if kept somewhere cool and dark.

To simply roast them:

Preheat oven to 400F. Cut the ends off of each squash and then cut in half the long way. Scoop the seeds out with a spoon. Cut squash into 1/2 inch half moons and place them on the baking sheets. Toss squash in the olive oil, then season with salt and pepper. Place baking sheets in in the oven and roast for 15-20 minutes, until the bottoms of the squash are nice and golden. Flip the squash and continue to roast for about 10-15 minutes until both sides are golden brown. Easy peasy!

You can eat them as is, or add them to your salad. They also are awesome in a sandwich. I stuffed them in a crusty baguette with sauteed kale and mashed avocado. Amazing!

If you want to try something a little fancier, check out this recipe. 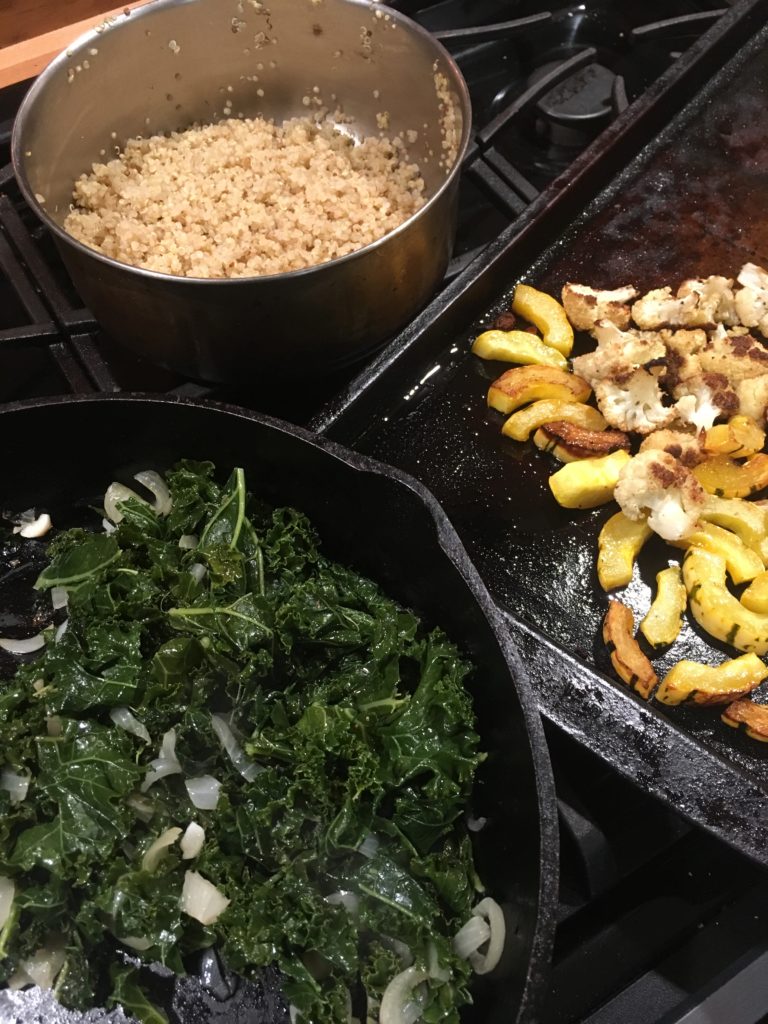 This can totally be a do ahead recipe. You can cook the quinoa and veggies the day before (say yes to batch cooking!) so then you’ll really just be cooking the greens and putting it all together the night you want to eat it!

While the oven’s preheating, cook the quinoa: In a saucepan, combine the 1 cup quinoa with 2 cups water. Bring to a boil, then reduce heat to low. Cook until the quinoa absorbs the liquid. About 12-15 minutes. Remove from heat and set aside covered for 5 minutes.

Lay the cauliflower on one baking sheet and the squash on another and toss with olive oil and salt. Roast for 20 minutes, or until cauliflower is tender (it’s OK if it’s not super roasted looking; it’s going to continue cooking when you bake the casserole).

In a large skillet over medium heat, add olive oil and the onion. Cook for a few minutes, or until onion is softened. Add the garlic and cook for 1-2 minutes, or until fragrant. Add the greens, lower the heat and saute until wilted. Cover the pan so it gets a chance to steam. (Time will depend on which green you use; spinach will only take a minute or two and collards may take 10 minutes.)

Turn cauliflower and squash into a large mixing bowl. Mix in the greens, quinoa, 1/2 the cheese, milk, mustard, salt and pepper. Mix well. Taste and then transfer mixture into a large baking dish. Top with more cheese (or not).

Bake for about 15 minutes or until the cheese on top is nice and melty. 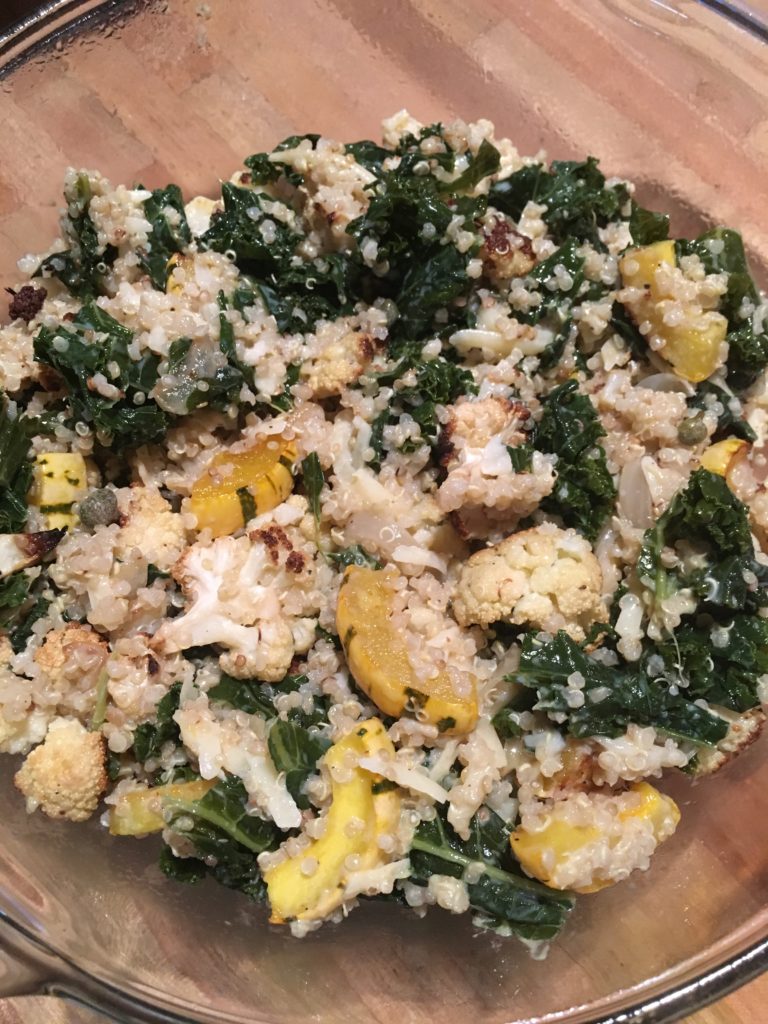 —
Have a fueling question for Ali? Post it below in the comments section or email MRG with your healthy-eating questions at heather [at] michiganrunnergirl [dot] com

Ali Lopez is a northern Michigan runner, chef and health coach. You can learn more about her at her web site Healthy Chef Ali. She’s also on Facebook here »