The year my youngest child was born, before I actually knew I was pregnant with him, I ventured out on a walk-run in our neighborhood. I’d been going to the gym on a regular basis and was feeling fitter than I’d ever been in my life. The next challenge, I’d decided, was to become a runner. A true runner. Someone who could go for a few miles and not feel utterly out of breath. How hard could this be, really? Pretty hard, I quickly realized, as I struggled to run more than a few minutes before wanting to stop and walk. I remember willing myself to reach that next mailbox before slowing. And then the cluster of trees at the corner. I walked-ran on a few other occasions, slowly building up a bit of stamina … and then I learned I was pregnant.

While I would like to say that throughout those next nine months I forged ahead on my quest to become a runner, truthfully I instead kept up only with my gym time. I think it’s because I hadn’t been at the running thing long enough for it to stick with me. I just didn’t give it enough of a chance. Of course, if you’ve been following along for awhile now, you know that I did return to running and found (sorry the pun) my footing in this sport.

I share all of this because 2016 is a special year for me and my running. I’ve been at this for 10 years! It’s my Runversary, as my friends Dimity and Sarah have called it over at their site Another Mother Runner.

So it seems appropriate, then, that I have decided to take on a new, BIG challenge in 2016…

In 2007, about a year after starting to run on a consistent basis, I ran my first race, the 25K at the Fifth Third River Bank Run in Grand Rapids. That year I also ran my first half marathon at Bayshore.

In 2010, I trained for my first full marathon with the ambitious goal of qualifying for Boston. I hired a coach, pushed myself harder mentally and physically than I ever had before, and reached my goal.

I’ve accomplished many other goals I’ve set for myself in the past few years, but one that’s lodged itself in my mind for awhile now just hasn’t happened … until this year, I am hoping.

And … I’d love for all of you to join me, whether this will be your very first swim-bike-run event, or you’re a seasoned triathlete (hey, you could give me much-needed tips, especially for the swimming part! Be sure to keep reading for a special race discount code just for MRGs wanting to sign on for Epic Races events…)

My participation in this year’s Tri Goddess Tri, and the opportunity for fellow Michigan Runner Girls to take part as members of the MRG Race Team (more details on this below), is through a partnership with the awesome Epic Races.

MRG and Epic Races have worked together in the past, most notably on the Detroit Goddess Half Marathon & 5K in Detroit (this year it’ll feature a 10K option, too!). For 2016, however, our partnership is bigger and better than ever — we’re teaming up to share with all of you the numerous races Epic puts on all year long. What this means for you: great deals and giveaways on race entries and runner swag; insider race and event details; inspiring stories of Michigan Runner Girls like yourself; interesting and entertaining podcast episodes about these events; and the chance to be a part of the MRG Race Team. 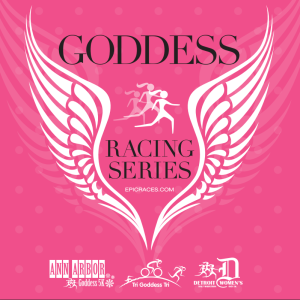 MRG and Epic Races will be working together on the Goddess Race Series, which includes the Ann Arbor Goddess 5K and Mile Run/Walk on May 8 Mother’s Day, the Tri Goddess Tri on June 26, and the American Home Fitness Detroit Goddess Half Marathon, 10K & 5K on Sept. 18. I will be at both the June triathlon and the September races (with my daughter Emma). Our hope is to have as many Michigan Runner Girls as possible at these events, and we’ll soon be sharing details about how you can do this by signing on to be a member of the Michigan Runner Girl Race team. (Expect sweet swag, training support and lots of fun with your fellow MRGs! Please stay tuned…)

In addition, this partnership means MRG will be sharing information about other Epic Races events, including: the Pi Run on March 13; the inaugural Waterloo Grit & Gravel, a 100K & 50K bike races & 10-mile non-competitive bike ride, on March 19; the Ann Arbor Marathon on April 3; the Hot Cocoa Classic 5K & Marshmallow Mountain Mile on Nov. 5 at Mt. Brighton; and others, like their summer triathlons and open swims.

There’s lots more to come, including an upcoming podcast episode devoted entirely to the Goddess Race Series and Epic Races — I’ll be interviewing Epic Races founder Eva Solomon — so be sure to check back here often. We’ll also be posting lots of info on the MRG Facebook page.

2016 is going to be a big year, with my spring marathon and with training for my FIRST TRIATHLON. (This deserves all caps; I’m pretty stoked.) I look forward to sharing this all with you guys, and I also hope to have many of you join me in participating in Epic Races events. If you’re ready to sign up for these events now, use this code to save 10% off your race entry: MRG16Epic10 — this is good for all races except the Ann Arbor Marathon.